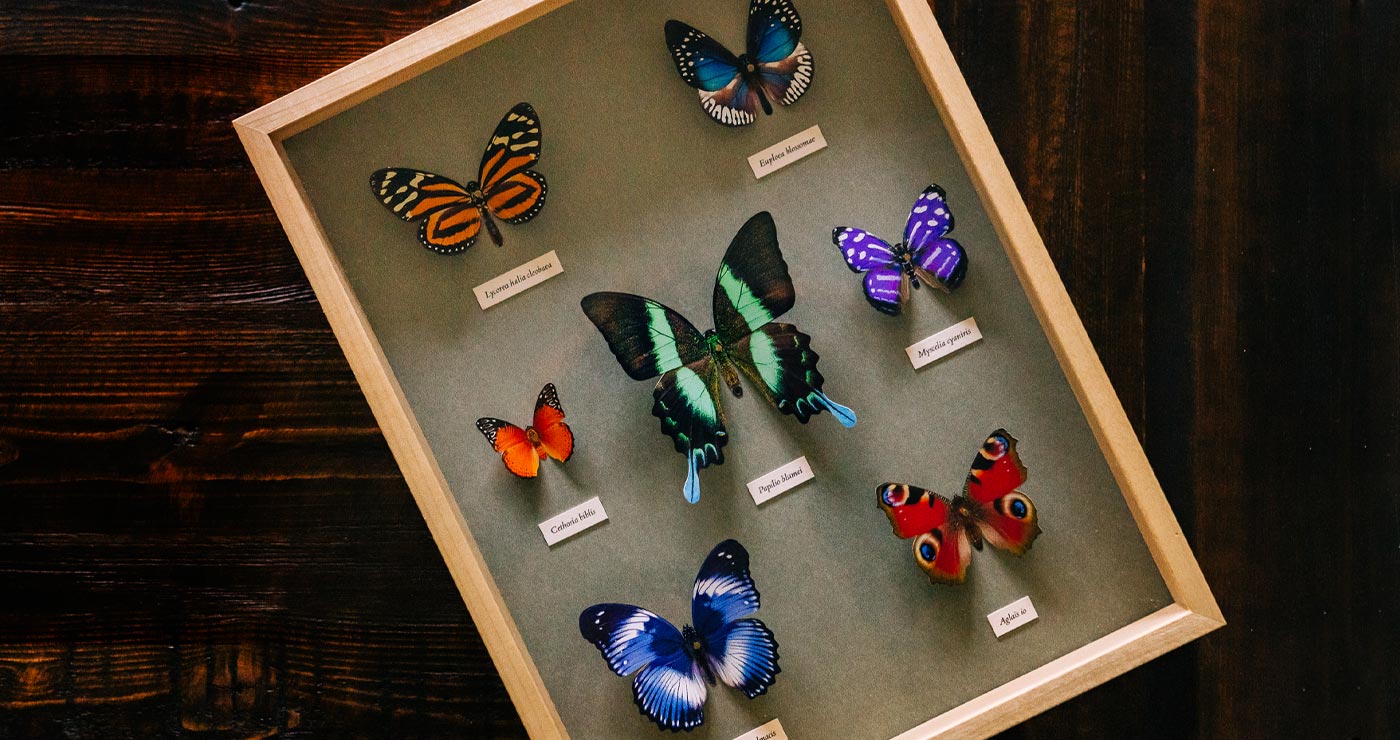 Hailed as the first modern psychological thriller, The Collector is the bestselling novel that catapulted John Fowles into the front rank of contemporary novelists.

When Frederick, a lonely clerk who collects butterflies, sets his gaze upon Miranda, a beautiful young art student, he discovers something more beautiful, rare and precious than any butterfly he’s ever seen. Disturbing, engrossing, and utterly unforgettable, The Collector is the story of Frederick’s obsessive love for Miranda, as he kidnaps her and holds her prisoner in the cellar of his rural farmhouse. The novel contains both the perspective of the captor and the captive.

The Collector is the first novel by John Fowles, whose multilayered fiction frequently explores the tensions between free will and the constraints of society, even as it plays with traditional novelistic conventions, and challenges readers to find their own interpretations. Upon its release in 1963, The New York Times raved, “There is not a page in this first novel which does not prove that its author is a master storyteller.”

In 1965, The Collector was adapted into an Academy Award nominated motion picture directed by William Wyler.

The signed limited edition of The Collector by John Fowles is presented in three states: Artist, Numbered and Lettered. The editions measure 6” x 9” and feature six illustrations by David Álvarez, as well as a new exclusive introduction by Bradford Morrow. The text pages are set in Bembo Book and Gill Sans, and the Numbered & Lettered editions are printed letterpress by Norman Clayton on a Heidelberg Cylinder in Ojai, California. The Numbered and Lettered editions are signed by Bradford Morrow and David Álvarez, and the Artist edition is signed by David Álvarez.

The Artist edition is limited to 1000 copies with a dust jacket featuring an illustration by Tom Adams which appeared on the cover of the first paperback edition of the novel. It is a full cloth, smyth sewn binding with two-hits foil stamping. It is the only edition of the three with the dust jacket, and is signed by artist David Álvarez. The edition is printed offset on archival Cougar Vellum and is housed in an illustrated paper covered slipcase. 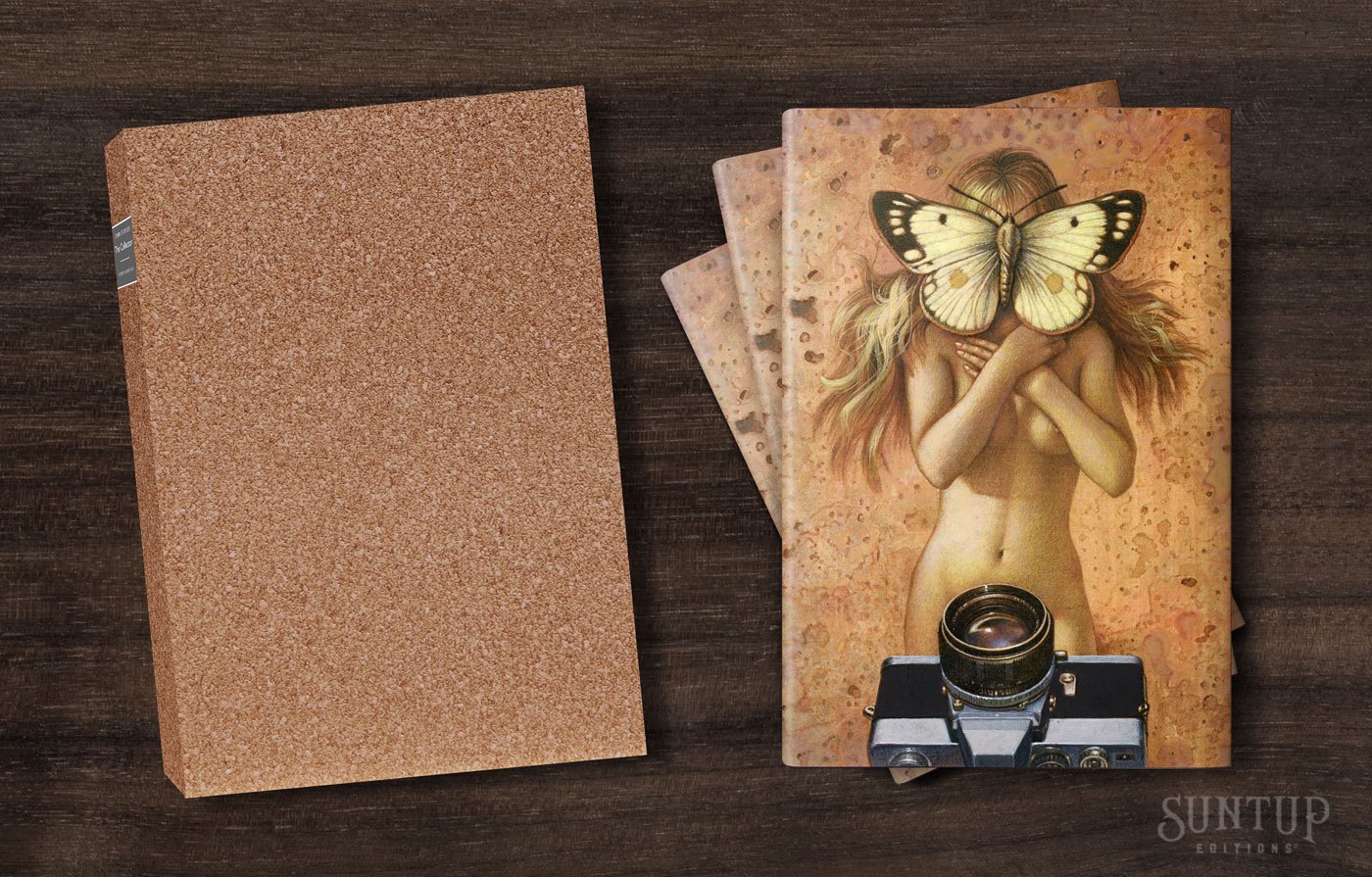 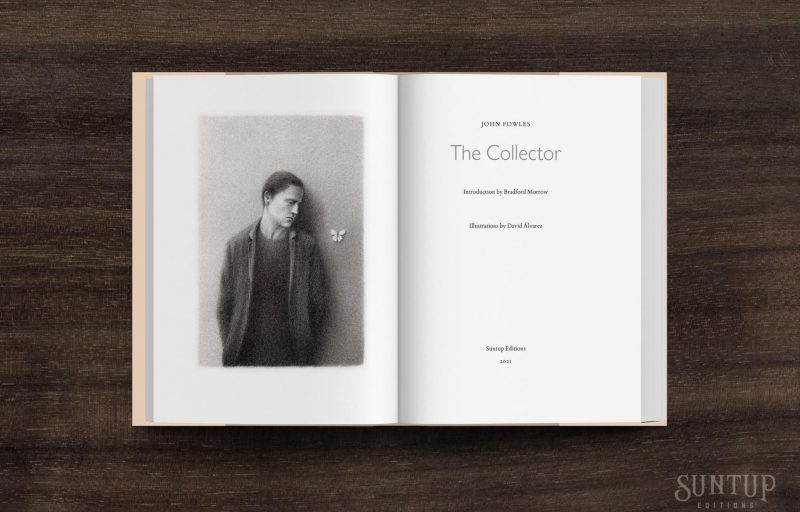 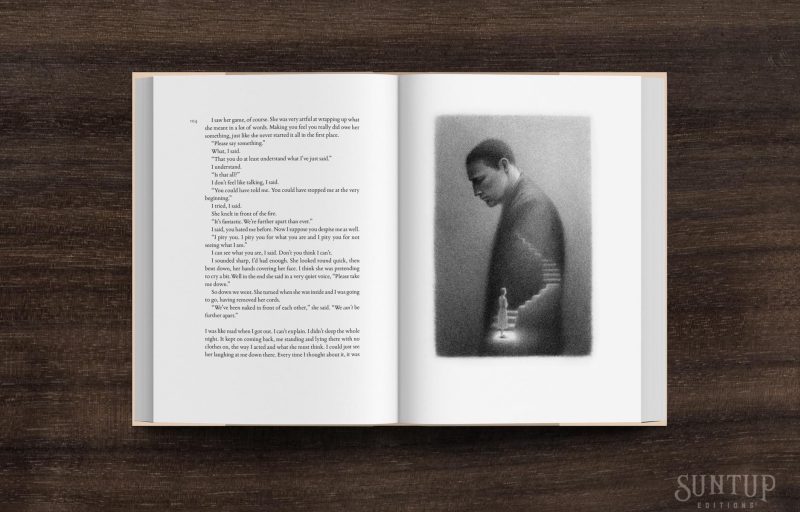 The Numbered edition of 350 copies is a quarter leather binding with Corkskin paper sides handmade in Portugal. The cover features a letterpress printed label and endsheets are Hahnemühle Bugra. The edition is printed letterpress on Mohawk Superfine and is housed in an embossed paper covered slipcase with an acrylic topcoat. The edition is signed by Bradford Morrow and David Álvarez. 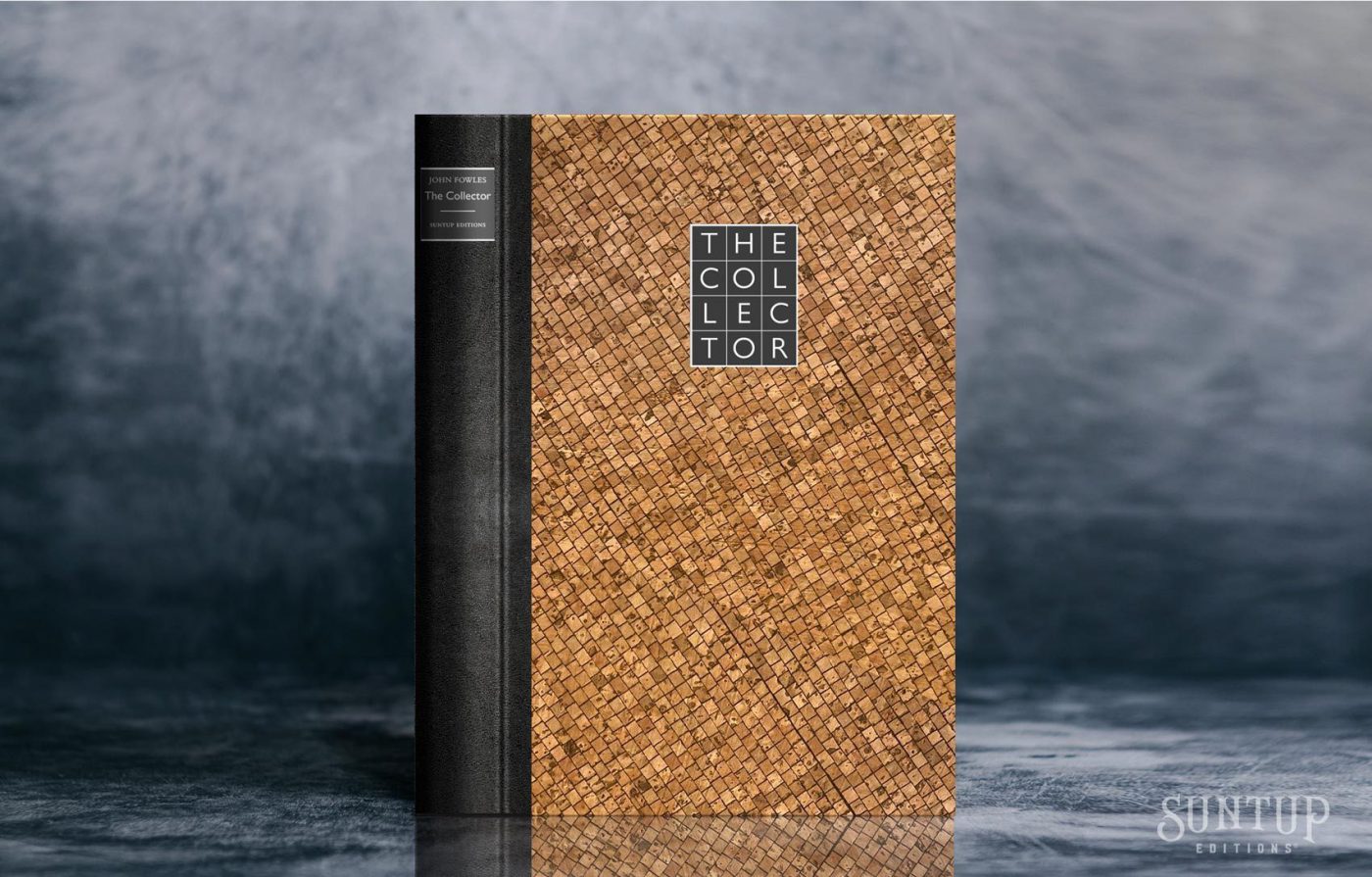 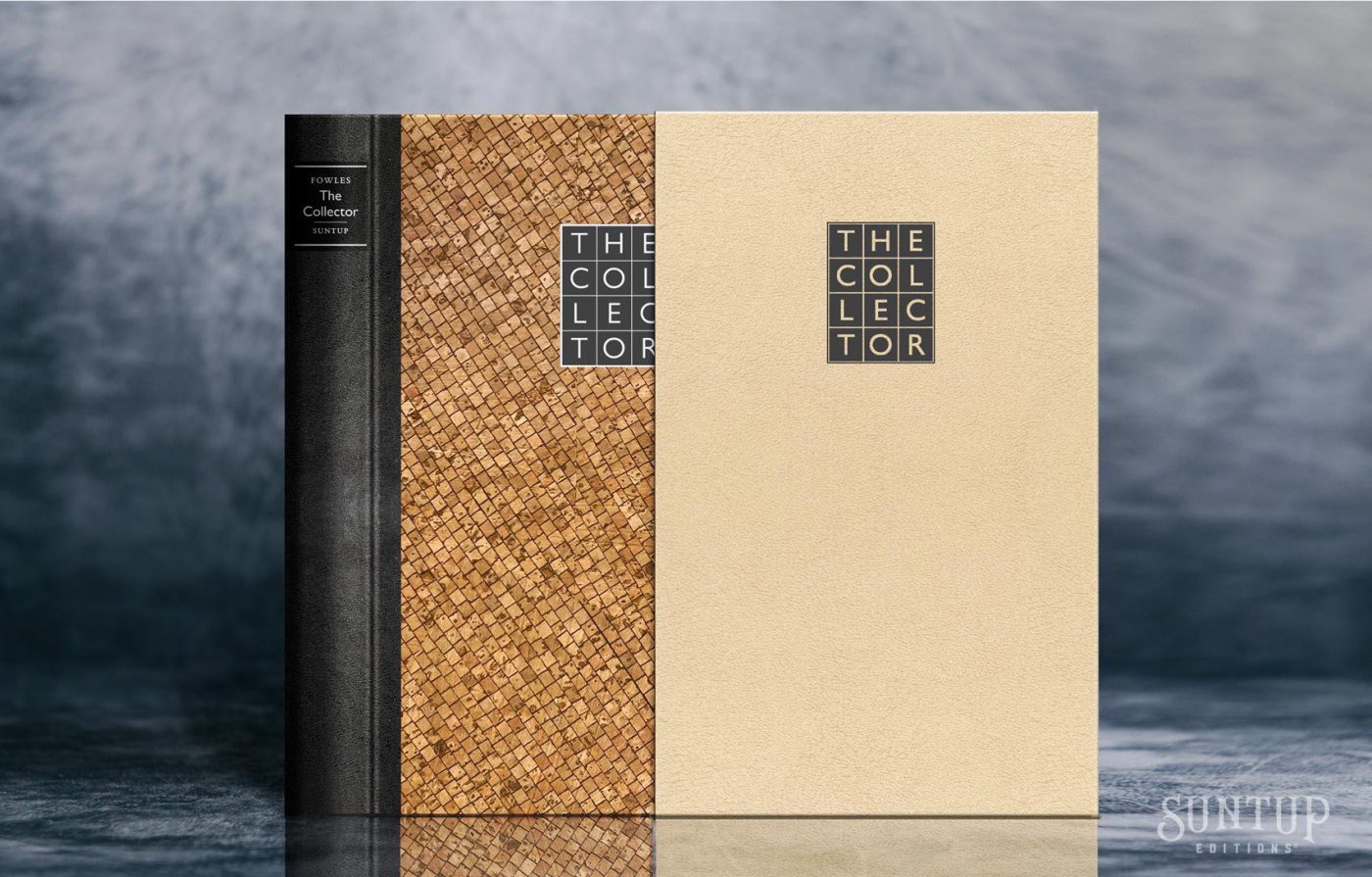 The Lettered edition is limited to 26 copies and is a full leather bradel binding with amandine buffalo covering the boards, and blackberry goatskin on the spine. It is produced through a collaboration between Erin Fletcher in Boston, Massachusetts and Hannah Brown in Somerset, England. The front cover features a handmade embroidered butterfly leather onlay. Endsheets are hand marbled and custom designed for this edition. The edition is printed letterpress on Mohawk Superfine and is signed by Bradford Morrow and David Álvarez.

The enclosure is handmade from Tulipwood and features an acrylic viewing panel in the lid displaying seven paper butterflies with their scientific names printed letterpress on paper labels. It is made to appear like an entomological viewing case, showcasing the group of butterflies.

The box is made by routing out grooves for the acrylic and base panels to sit in. The lid is rebated and pushes snugly onto the base. The corners of the box are secured using splines of oak, chosen to contrast with the paler Tulipwood of the main box.

The book sits in a well in the base of the box which is lined with dark grey suede. The box is made by Hannah Brown and was inspired by a previous bookbinding project Hannah worked on that is now in the collection of the Boston Athenæum, USA. 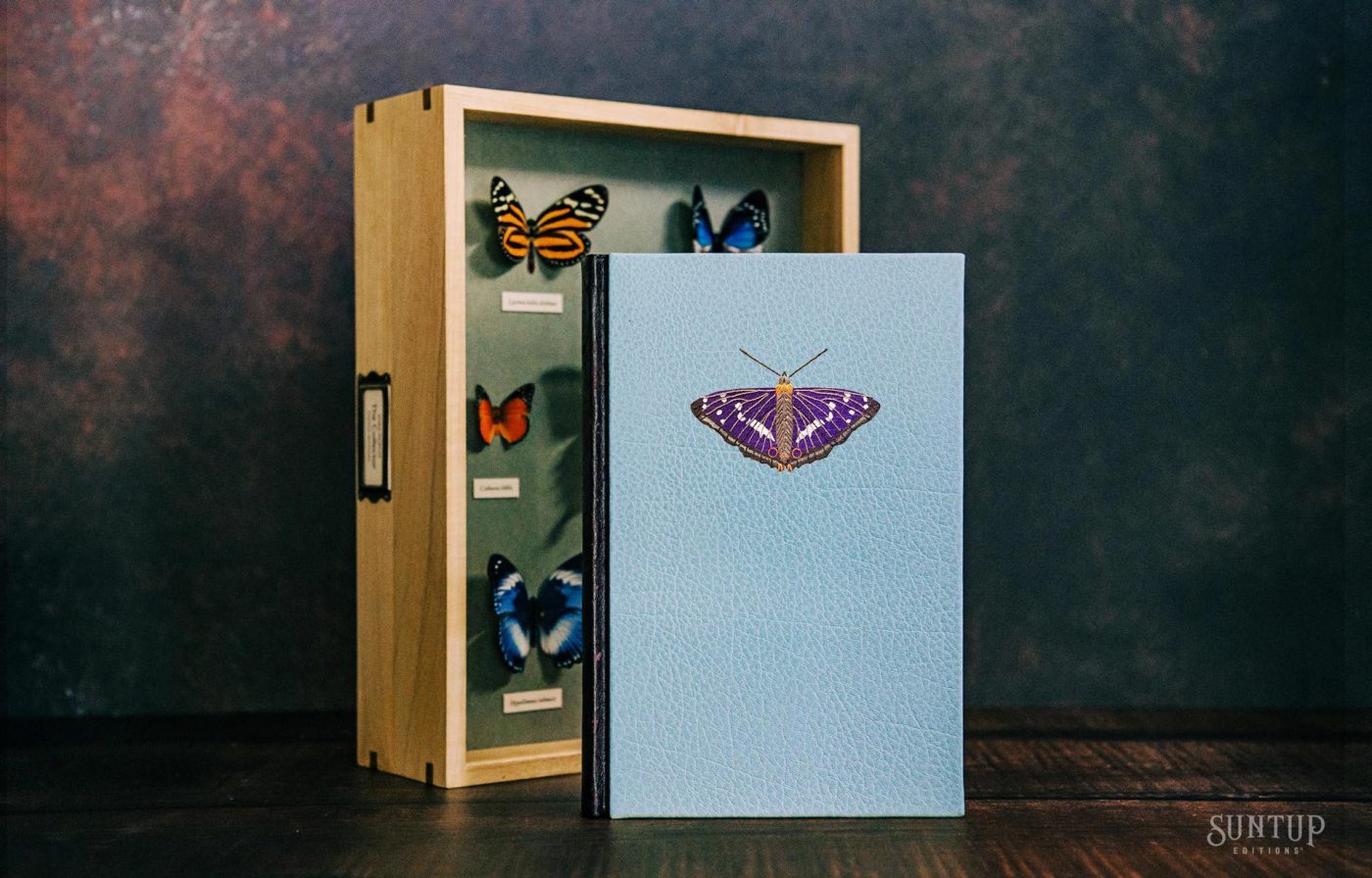 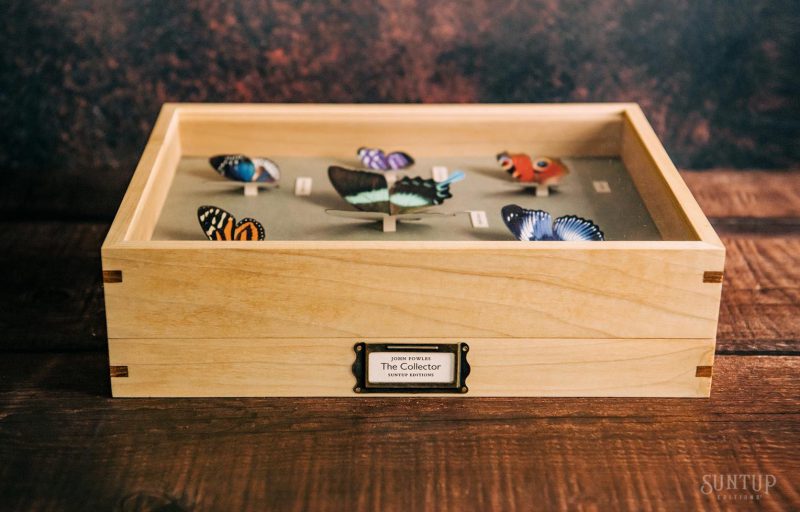 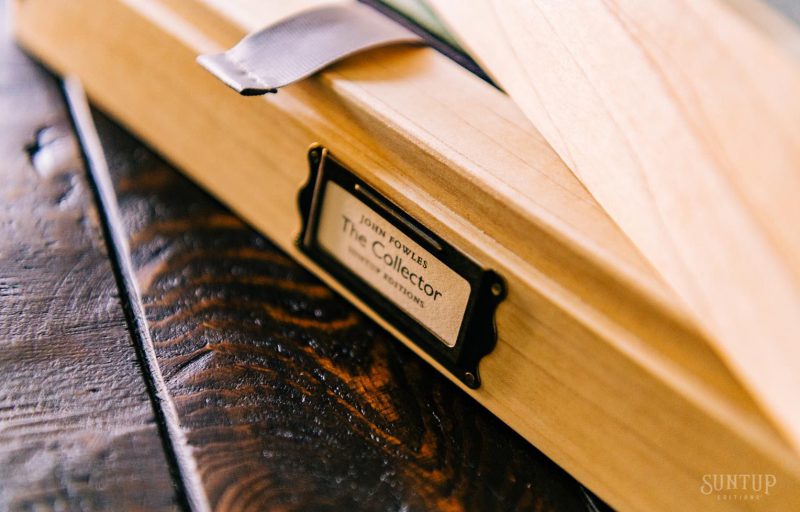 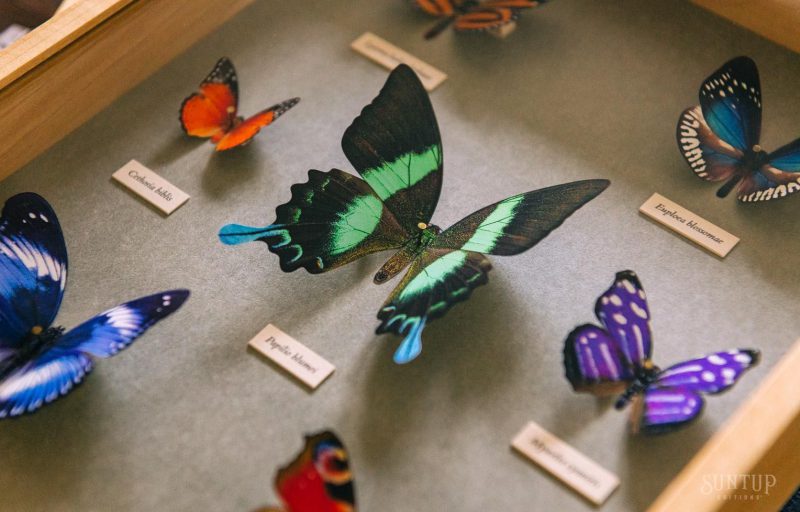 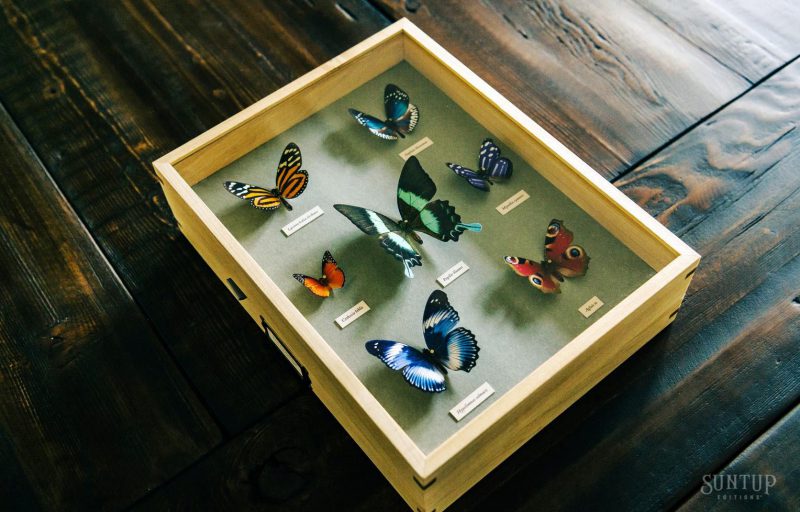 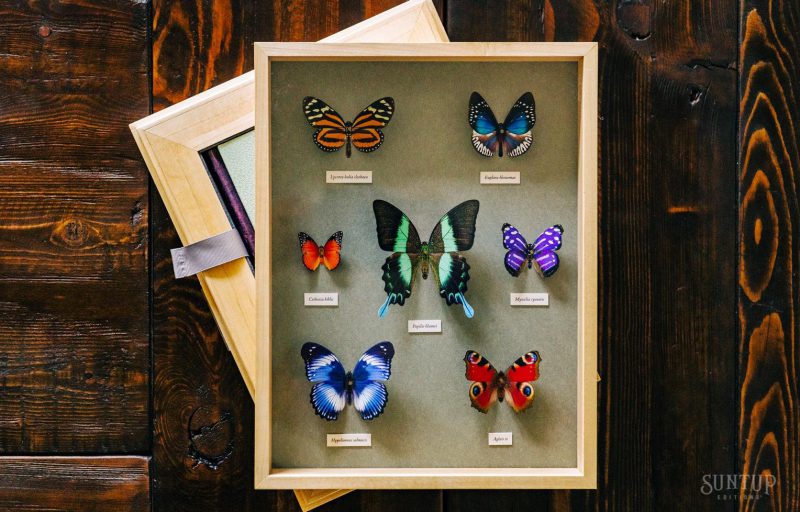 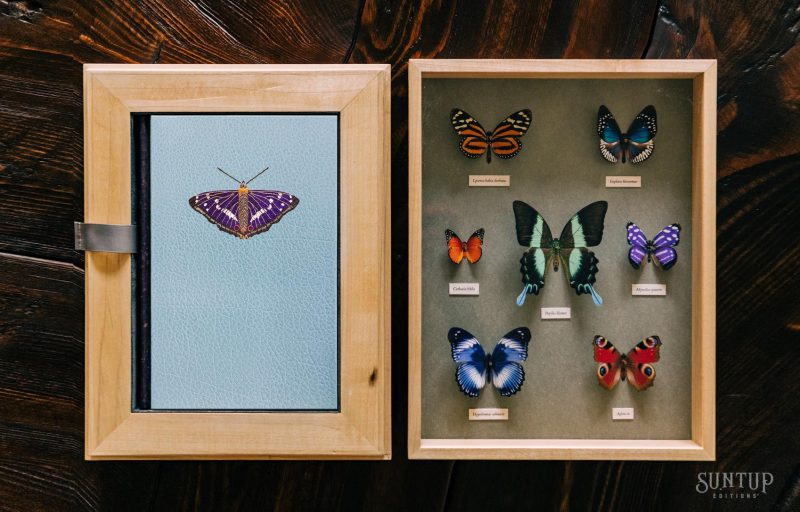 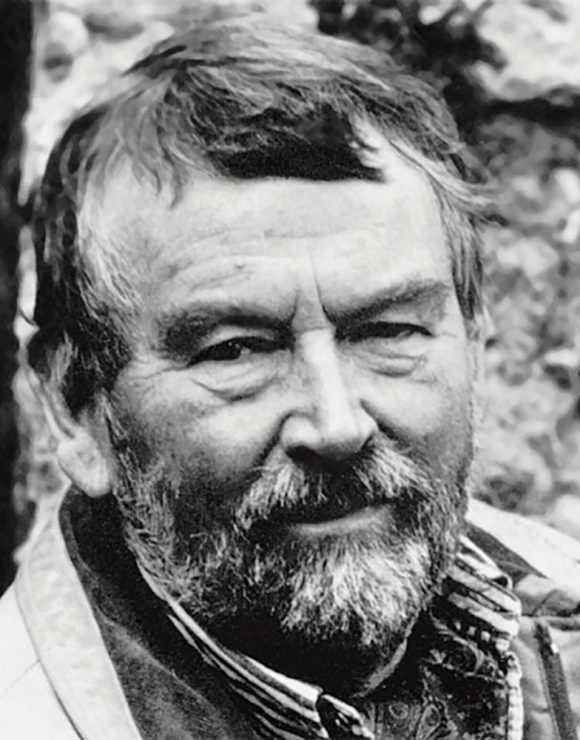 John Fowles (1926–2005) was educated at Oxford and subsequently lectured in English at universities in Greece and the UK. The success of his first novel, The Collector, published in 1963, allowed him to devote all his time to writing. His books include the internationally acclaimed and bestselling novels The Magus, The French Lieutenant’s Woman, and Daniel Martin. Fowles spent the last decades of his life on the southern coast of England in the small harbor town of Lyme Regis. 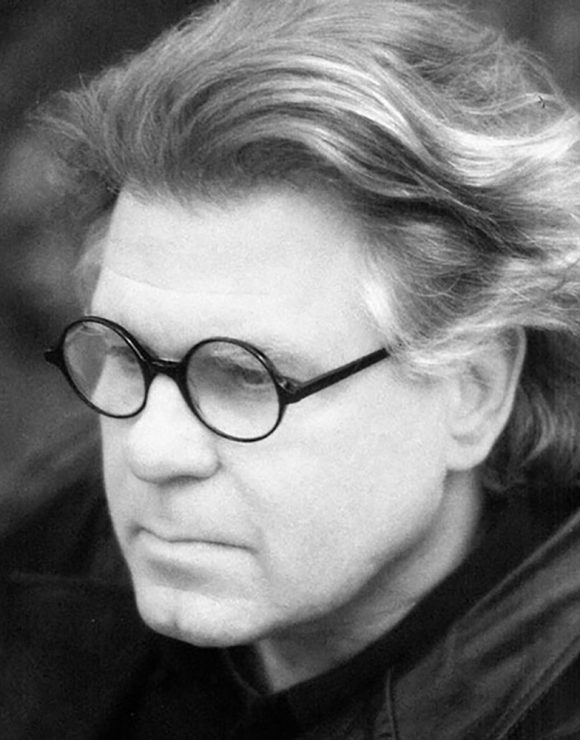 Bradford Morrow is the author of several works of fiction, including Come Sunday and The Uninnocent. He is the recipient of numerous awards, among them the Academy Award in Fiction from the American Academy of Arts and Letters, O. Henry and Pushcart Prizes, and a Guggenheim Fellowship. Morrow is the founder and editor of the acclaimed literary journal, Conjunctions. He has also published volumes of poetry, including Posthumes and A Bestiary, as well as a children’s book, Didn’t Didn’t Do It, in collaboration with the legendary cartoonist Gahan Wilson. 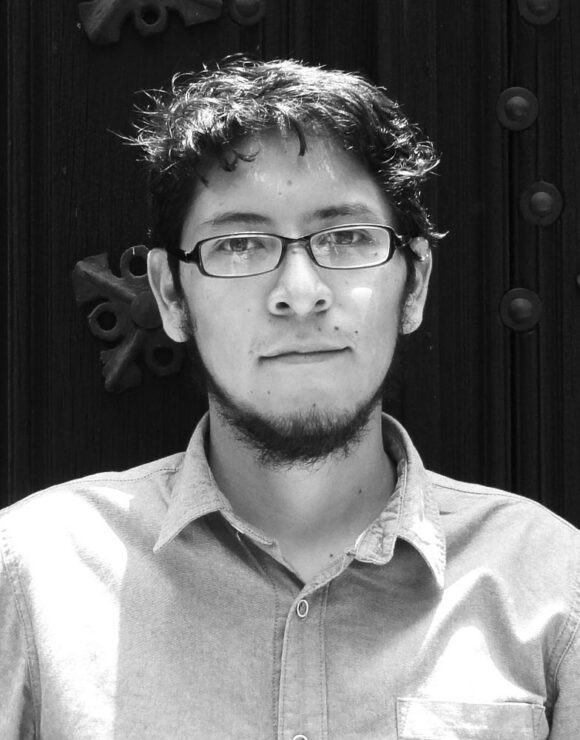 David Álvarez was born in Mexico City. He is a full-time illustrator whose work frequently explores how humanity moves, thinks and behaves by reflex and without autonomy. Fascinated with shadows and light, Álvarez finds black and white drawings to be one of his favorite ways to solve the images he conjures in his head. He exhibits his art in galleries throughout the world.

A Matching Pre-Order email is sent to owners of our previous publication (Charlie and the Chocolate Factory) at 9:00 A.M. PT on the day of announcement. If you did not receive the email, contact us here. If your order is not received before the deadline, your designated number or letter will be assigned to the new owner. 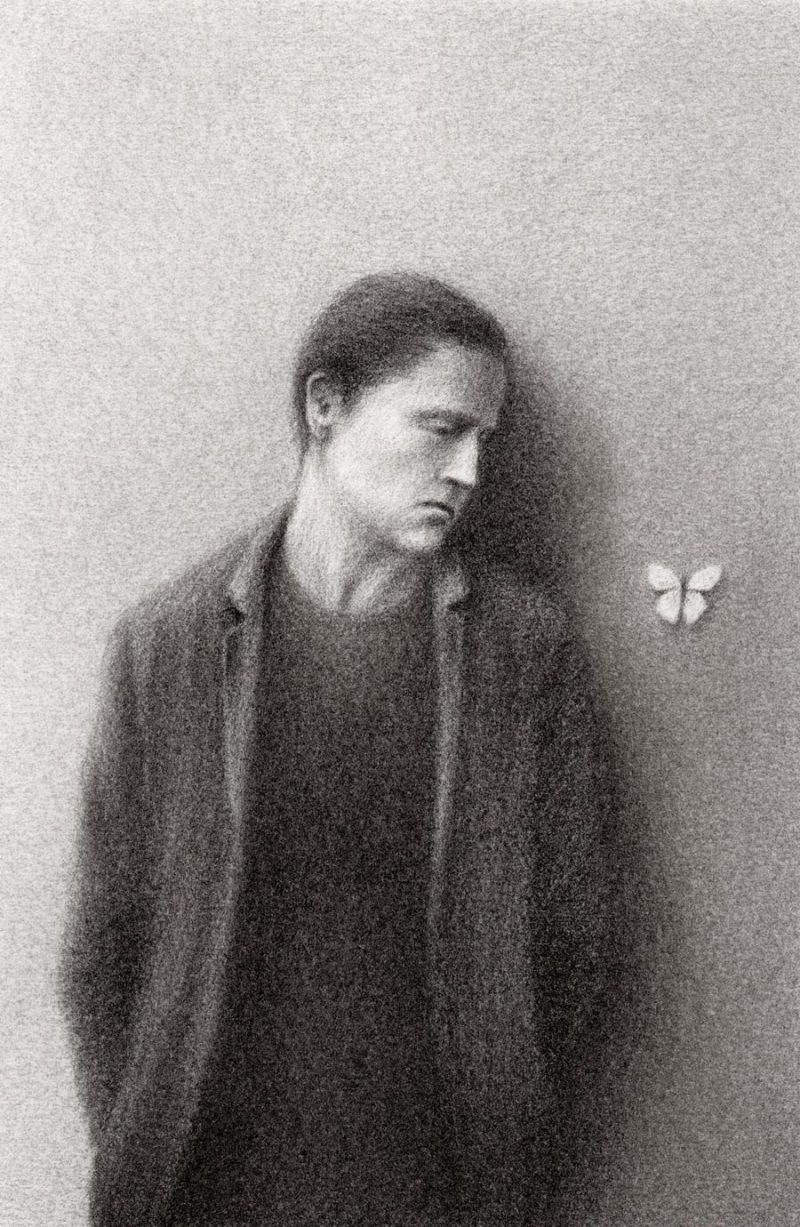 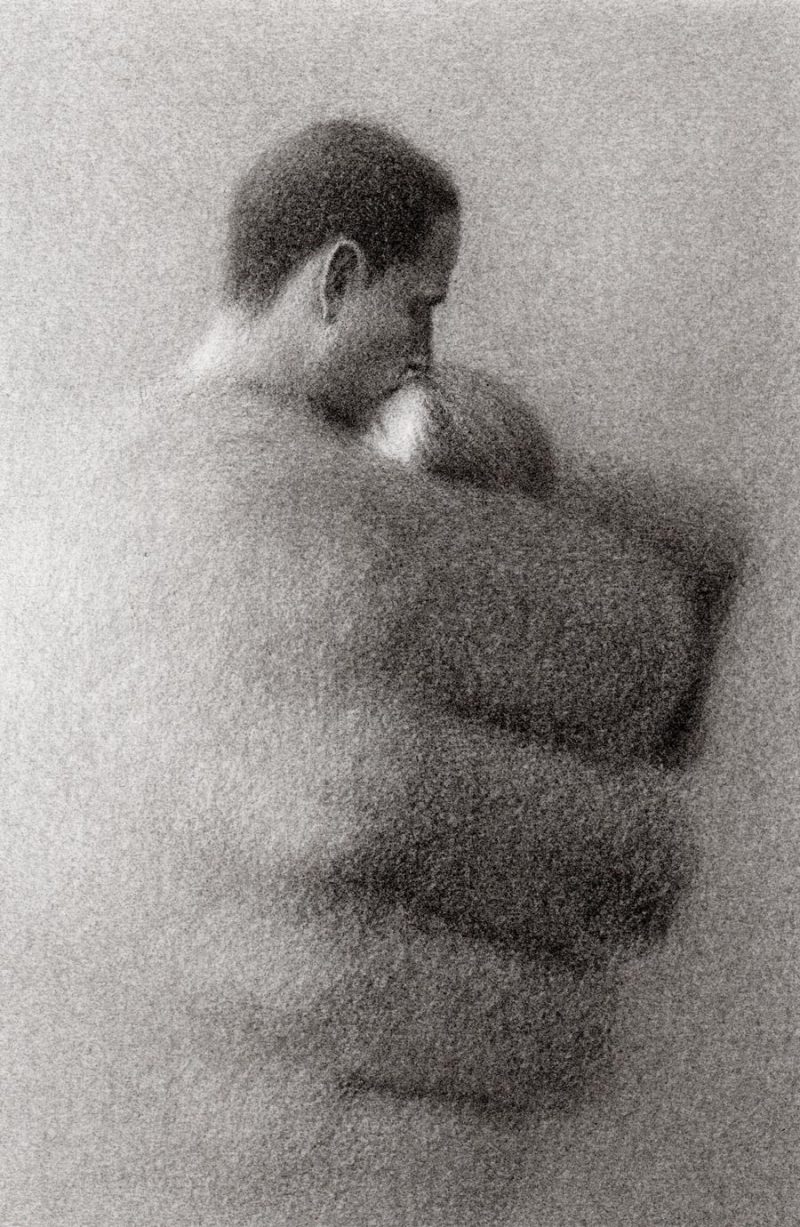 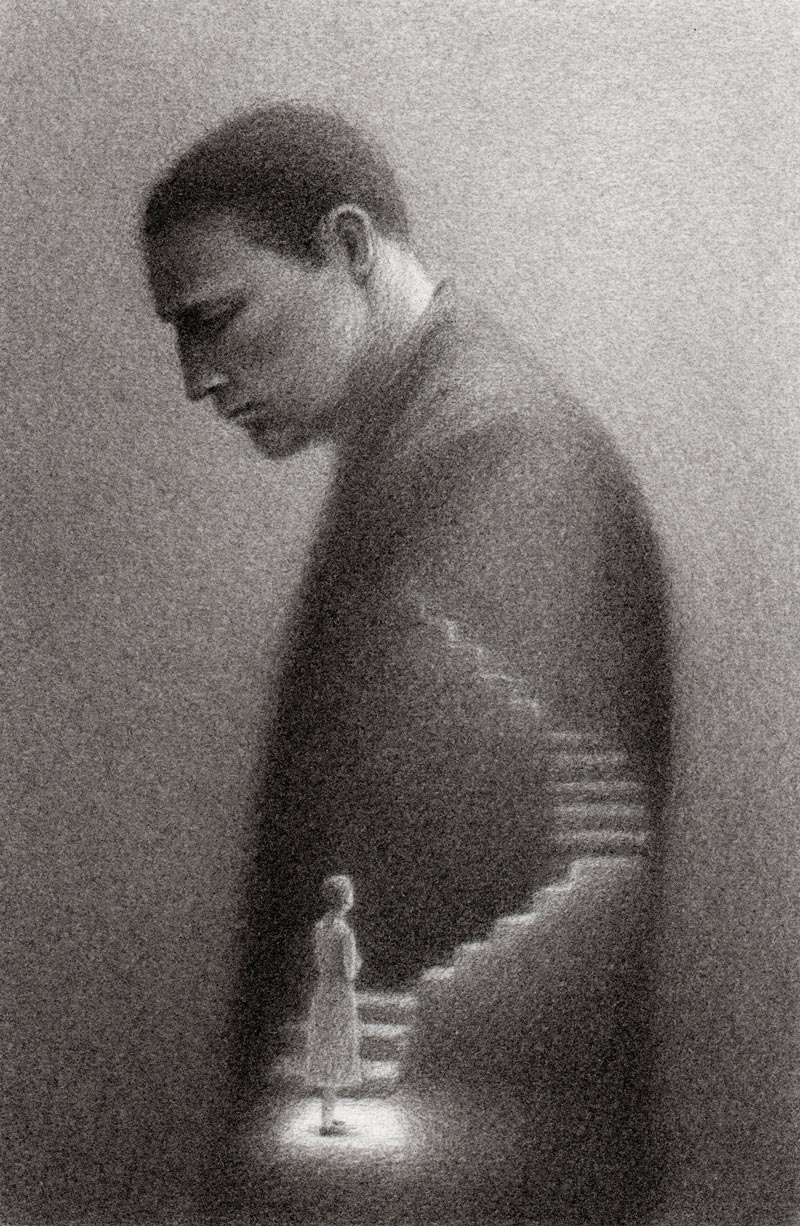 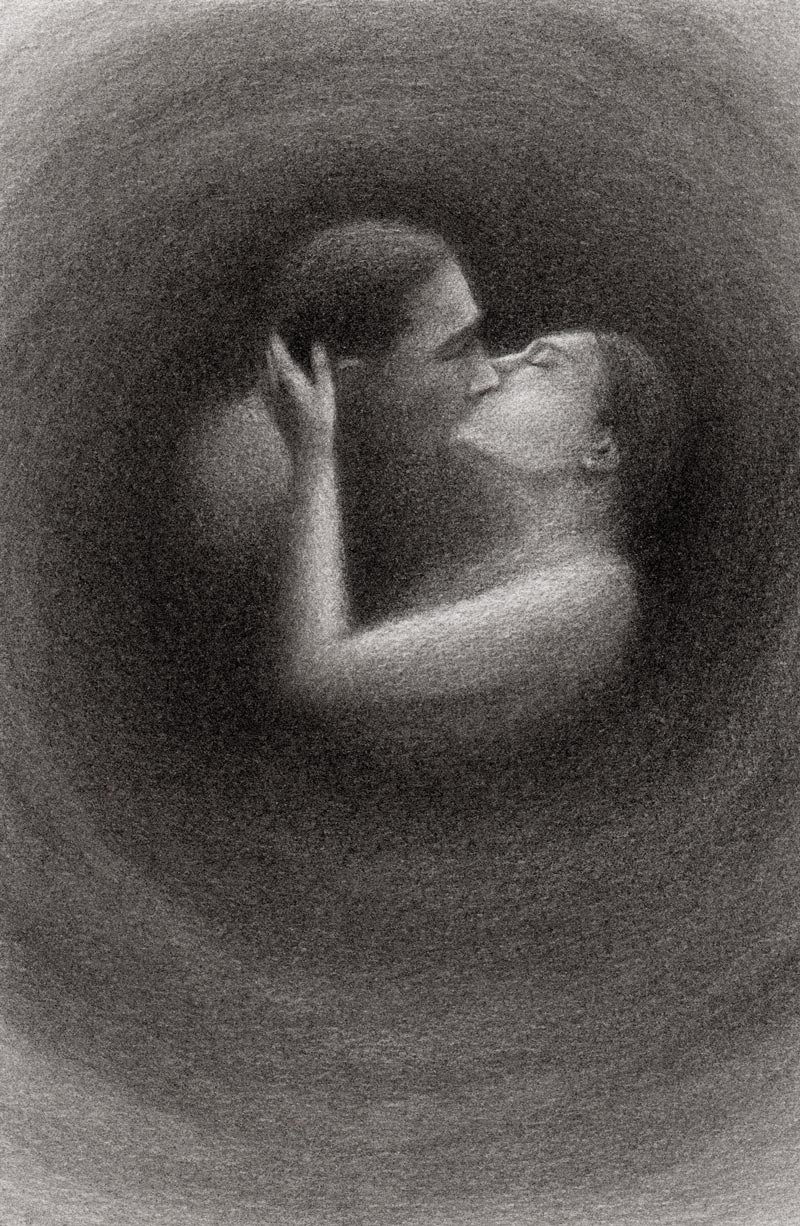 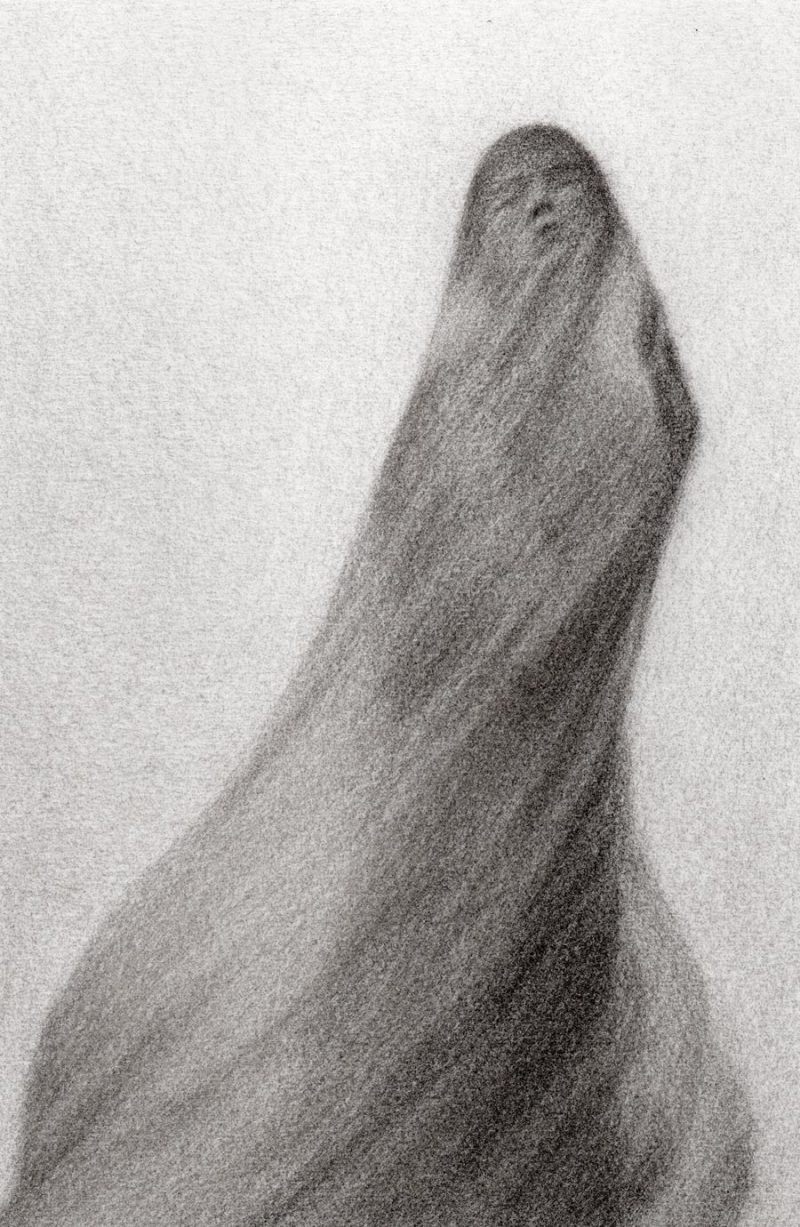 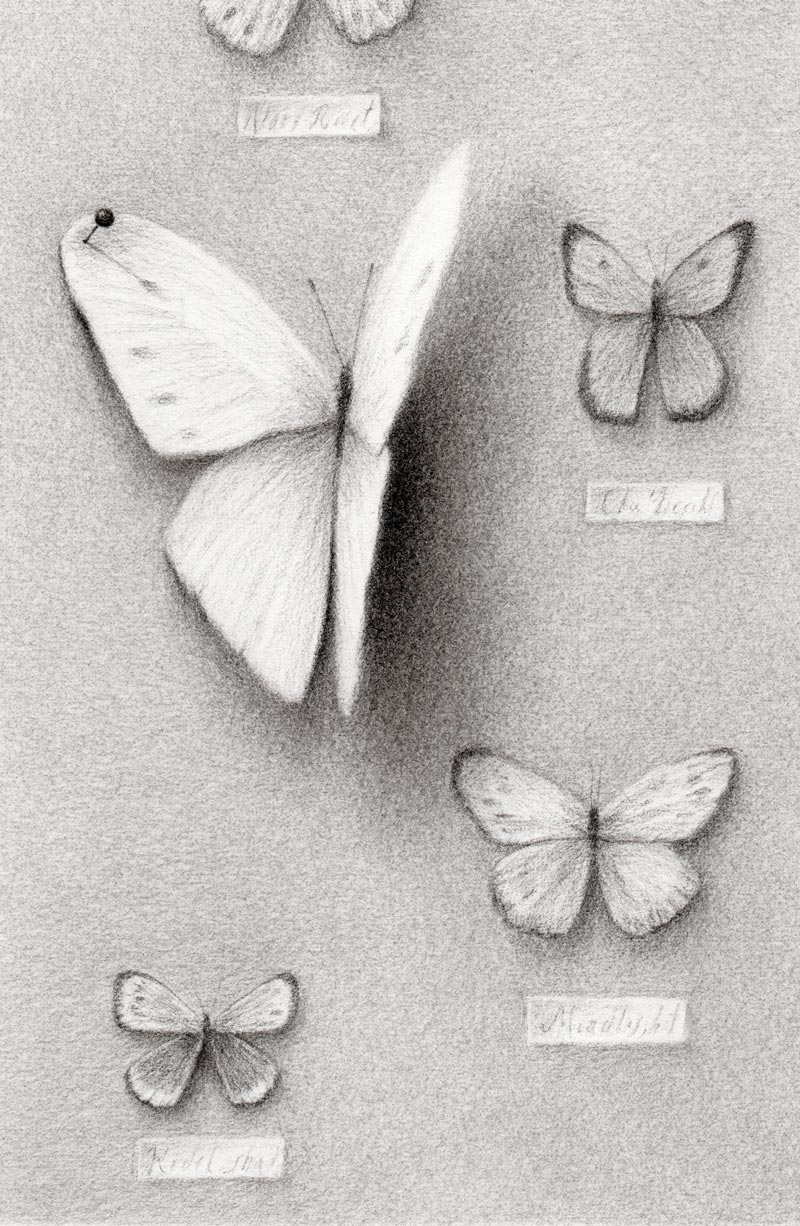