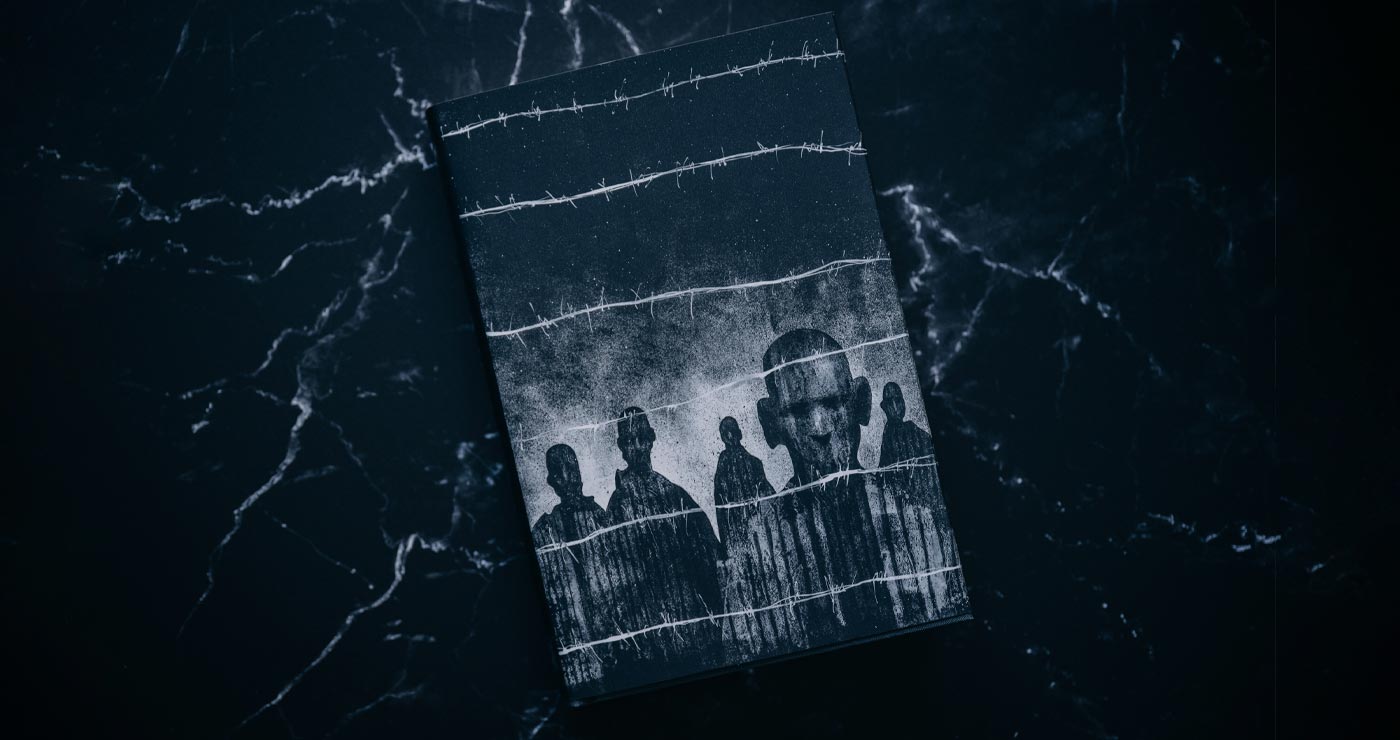 An extraordinary novel, Schindler’s Ark is a work of historical fiction based on the true story of German industrialist and war profiteer, Oskar Schindler, who risked his life and fortune to rescue over a thousand Jews from the horrors of the extermination camps.

Working from the actual testimonies of those who Schindler saved from the gas chambers, Thomas Keneally artfully depicts the courage and shrewdness of an unlikely savior, a man who is a flawed mixture of hedonism and decency and who, in the presence of unutterable evil, transcends the limits of his own humanity.

Keneally’s masterpiece was first published in the United Kingdom on October 18, 1982 as Schindler’s Ark. The title was changed to Schindler’s List upon publication in the United States. To commemorate the 40th anniversary of this milestone in Holocaust literature, Suntup Editions is pleased to announce the forthcoming publication of a signed limited edition of this novel under its original title, Schindler’s Ark, featuring a new exclusive introduction by the author and illustrations by award-winning artist Jeffrey Alan Love.

Also included in the edition is a transcript of an impassioned speech Oskar Schindler gave to Jewish factory workers upon proclamation of Germany’s surrender on May 8, 1945, a letter written by the Jewish factory workers in 1945 attesting to Schindler’s role in saving Jewish lives, and scans of Schindler’s original list containing the names and birth dates of those who he saved. These historically significant documents are referenced in the novel, but here for the first time in any edition of Schindler’s Ark, appear in full.

Schindler’s Ark was awarded the Booker Prize in 1982. The novel was also awarded the Los Angeles Times Book Prize for Fiction in 1983. In 1993, it was adapted into a film directed by Steven Spielberg, which won seven Academy Awards including Best Picture, and is #8 on American Film Institute’s Top 100 Films of All Time. The film was designated as “culturally, historically or aesthetically significant” by the Library of Congress in 2004 and selected for preservation in the United States National Film Registry.

This edition of Schindler’s Ark by Thomas Keneally is presented in three states: Artist, Numbered and Lettered. The editions measure 6” x 9” and feature seven illustrations by Jeffrey Alan Love. The editions include a new introduction by the author and over 25 pages of bonus content.

The Artist edition is limited to 750 copies, and is the only edition to include a dust jacket with illustrations by Jeffrey Alan Love. It is a smyth sewn, full cloth binding with two-hits foil blocking on the spine and a blind stamped cover. Endsheets are printed on acid free Rainbow paper with a custom pattern designed for this edition, and it is housed in a cloth covered slipcase. The edition is printed offset on premium Mohawk Via Vellum paper and is signed by the artist. 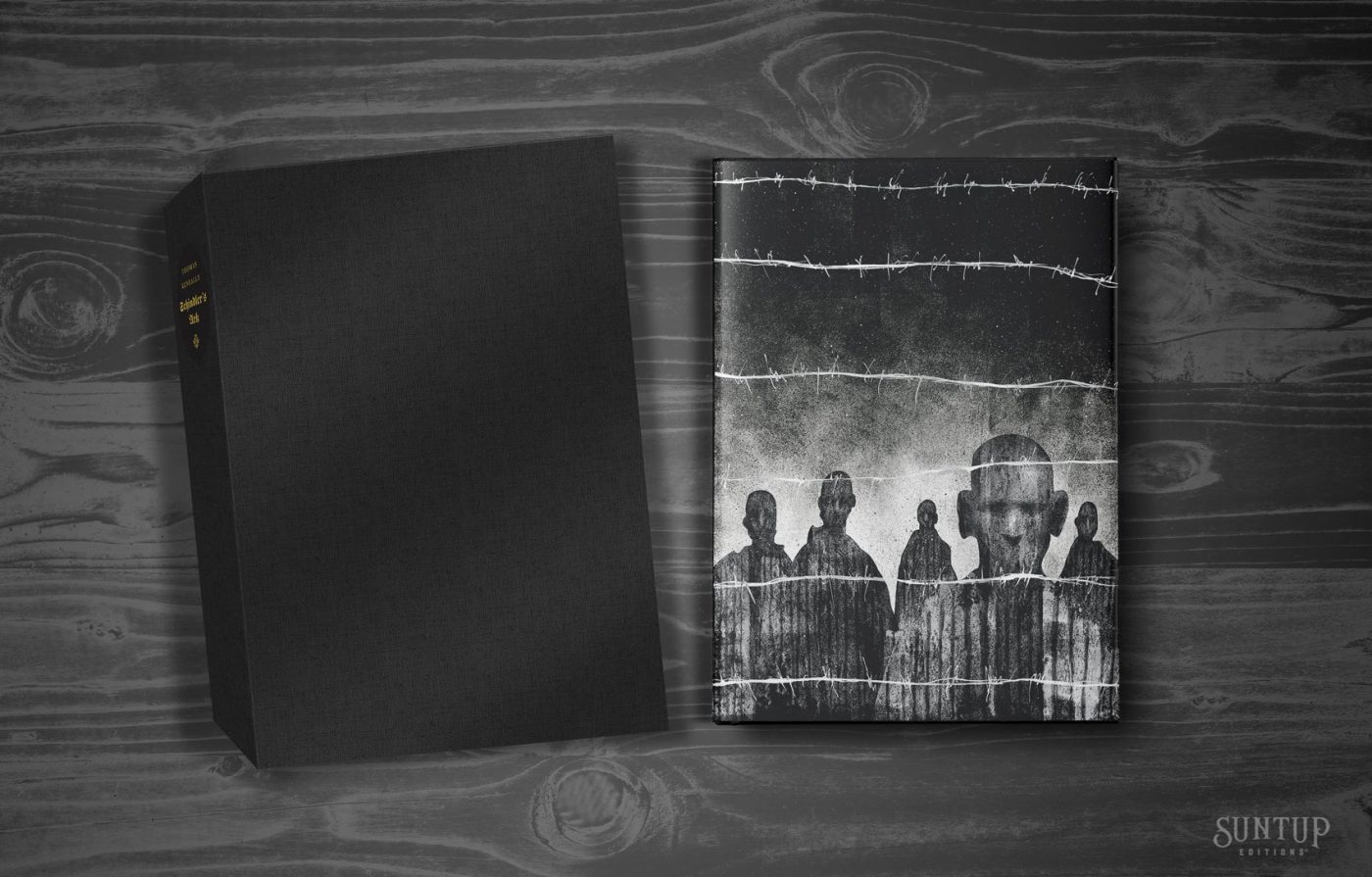 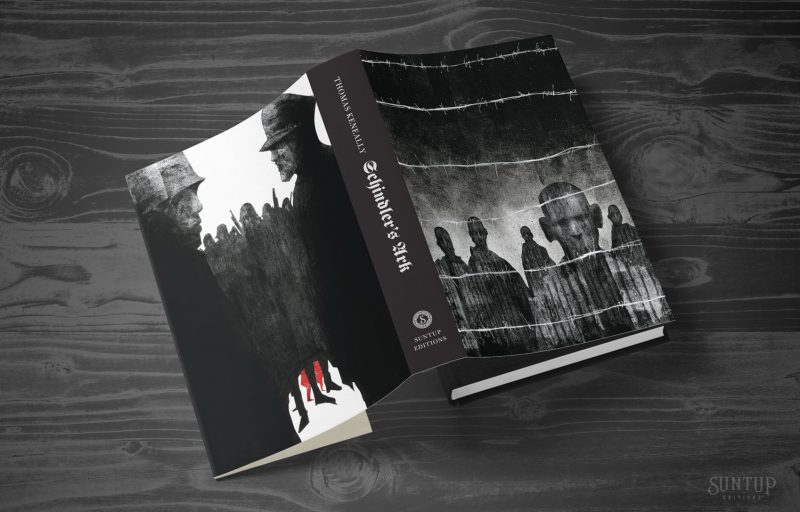 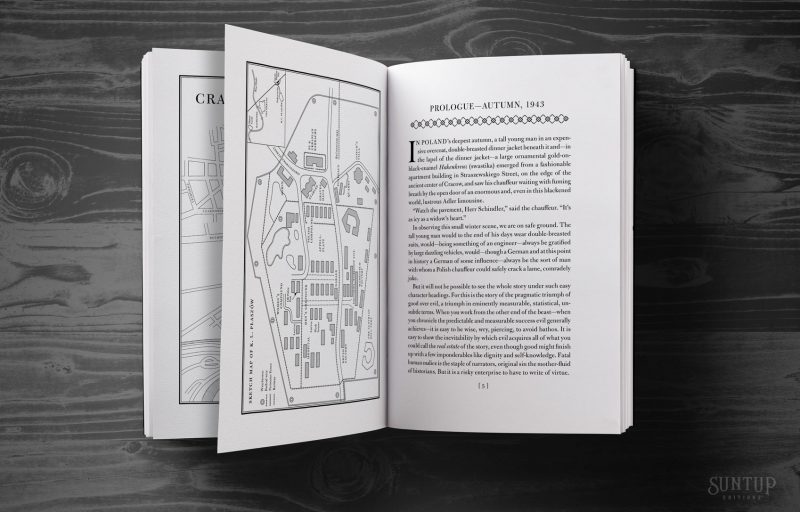 The Numbered edition of 250 copies is a full Japanese cloth binding with a rounded spine. The cover is foil blocked and features a Star of David die-cut from Canson Mi-Teintes paper and inset into the cover. Endsheets are custom designed for this edition and are printed letterpress in two colors on Hahnemühle Bugra paper.

The edition is printed letterpress on Mohawk Superfine by Bradley Hutchinson in Austin, Texas on his Heidelberg Cylinder, and is housed in a slipcase covered with Japanese cloth. It is signed by Thomas Keneally and Jeffrey Alan Love. 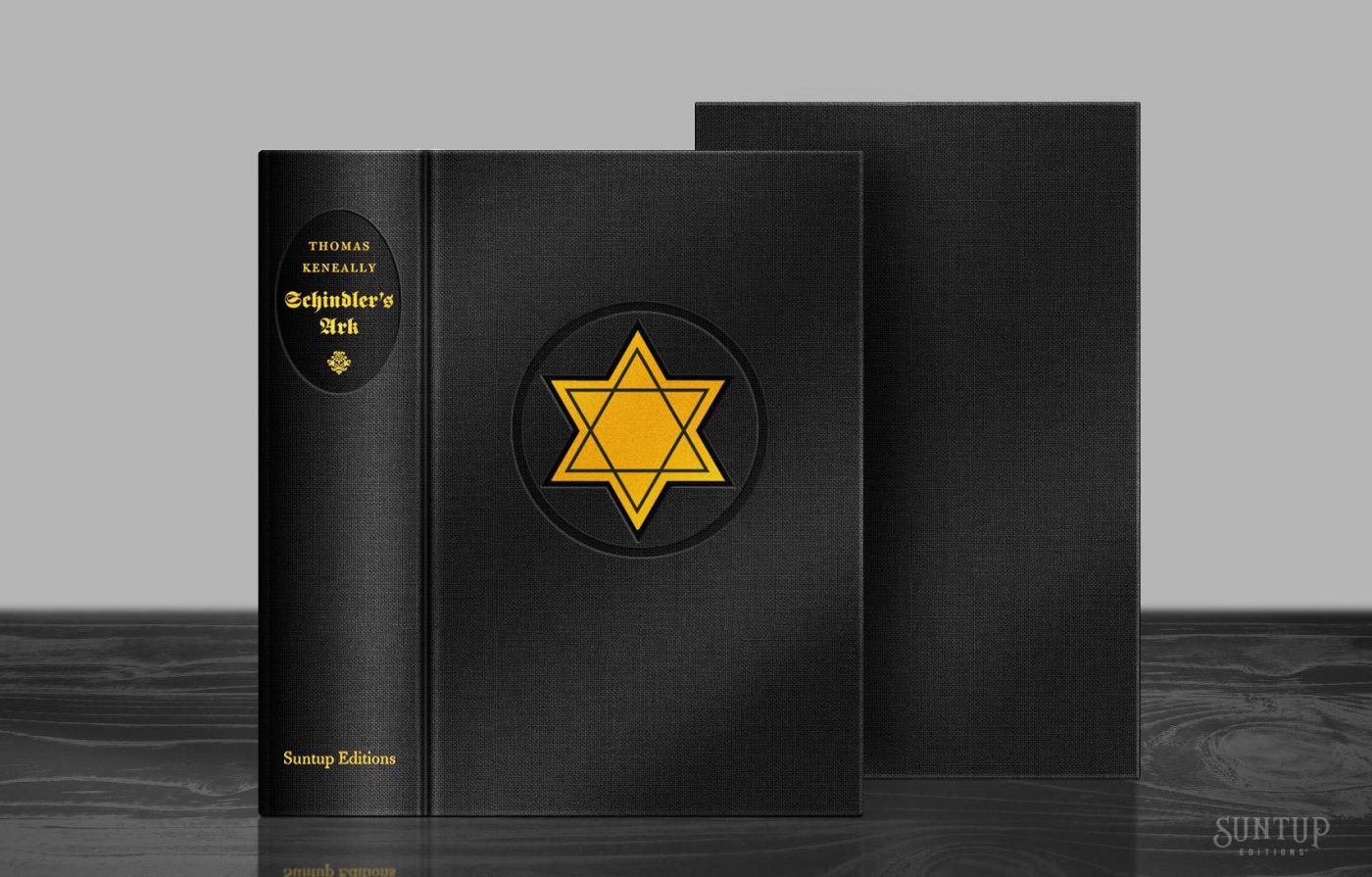 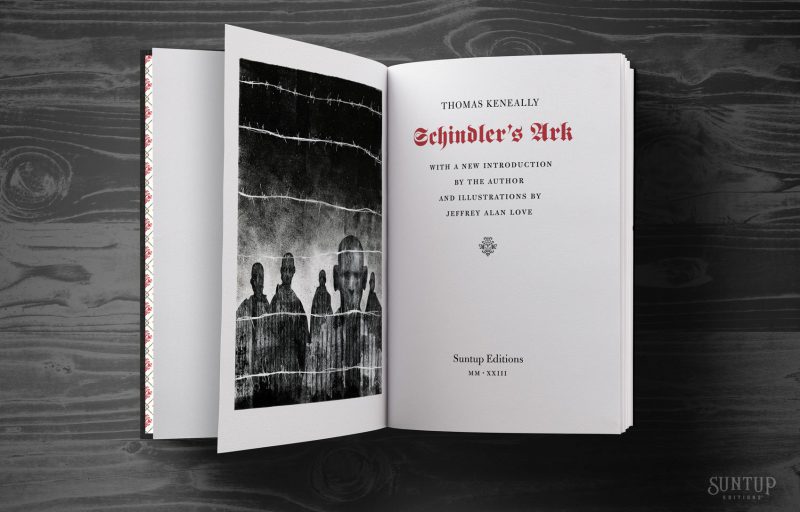 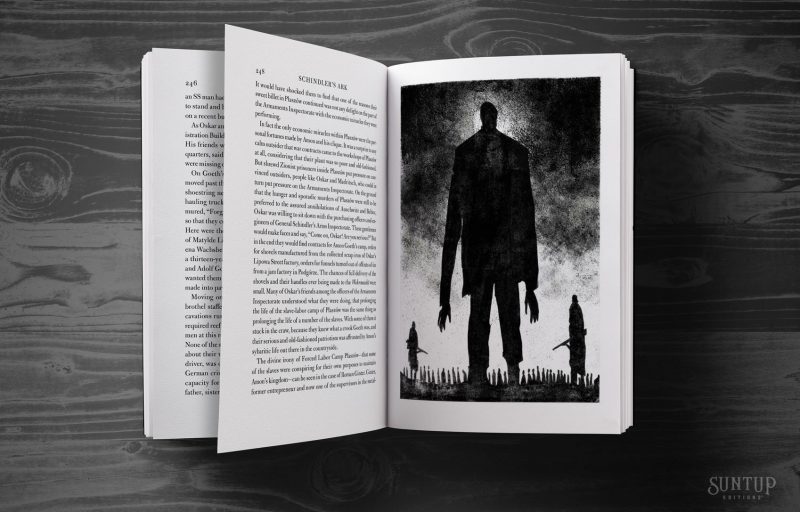 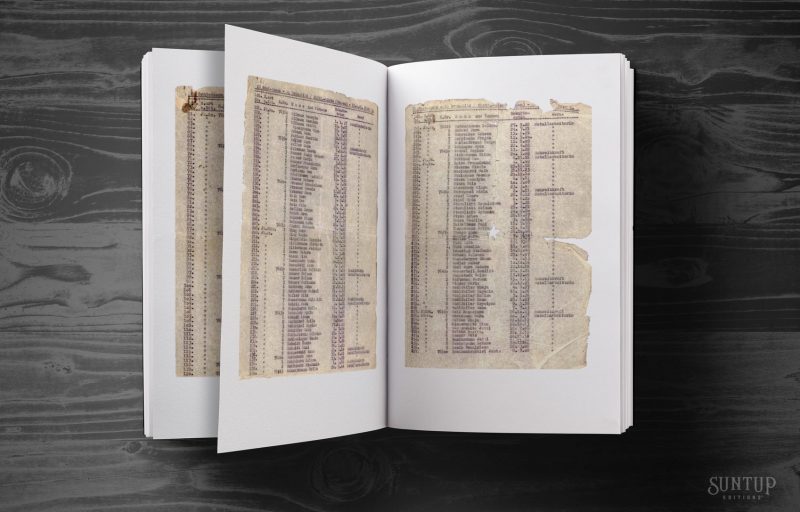 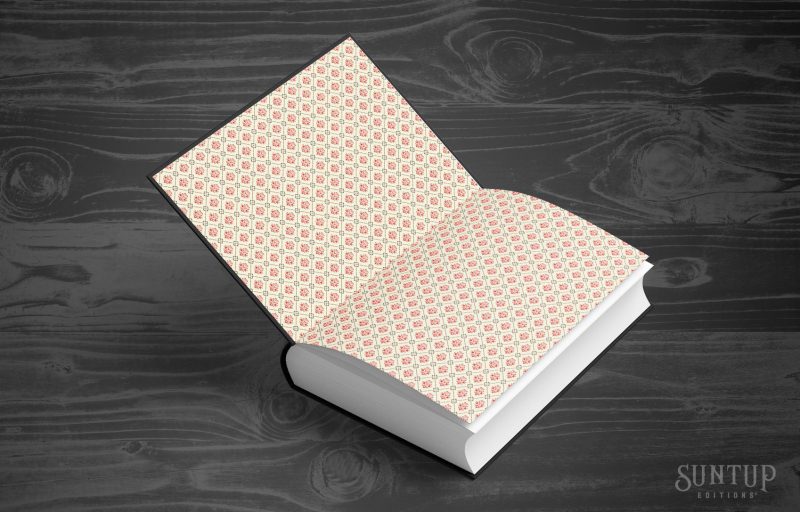 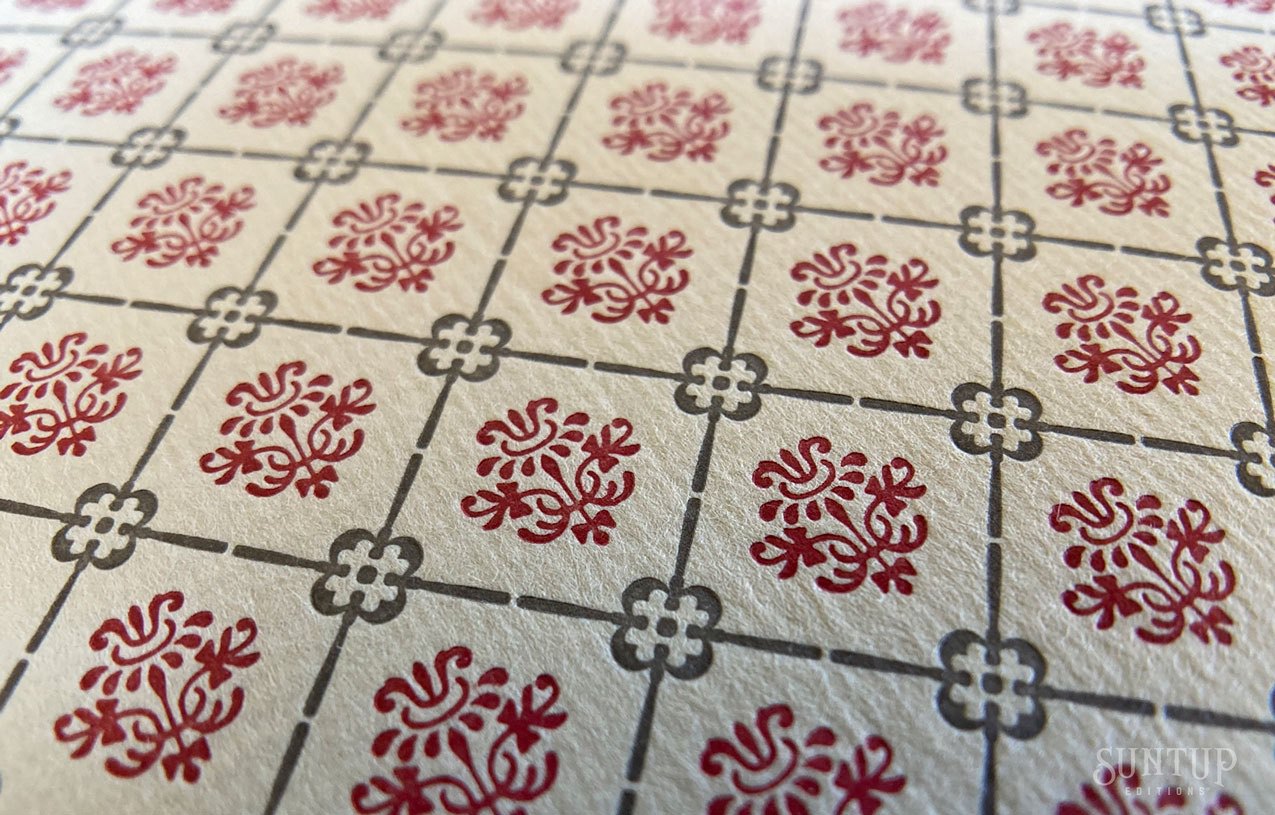 The Lettered edition is limited to 26 copies lettered A-Z and is quarter bound in Japanese cloth with marbled paper over boards. The marbled papers are handmade for this edition by Claire Guillot in France. The spine and cover labels are printed letterpress on Hahnemühle Bugra and endsheets are marbled. The edition is housed in a clamshell enclosure covered in Japanese cloth lined with flocked velour, and it is printed letterpress on Somerset Book mouldmade paper by Bradley Hutchinson in Austin, Texas on his Heidelberg Cylinder. The edition is signed by Thomas Keneally and Jeffrey Alan Love. 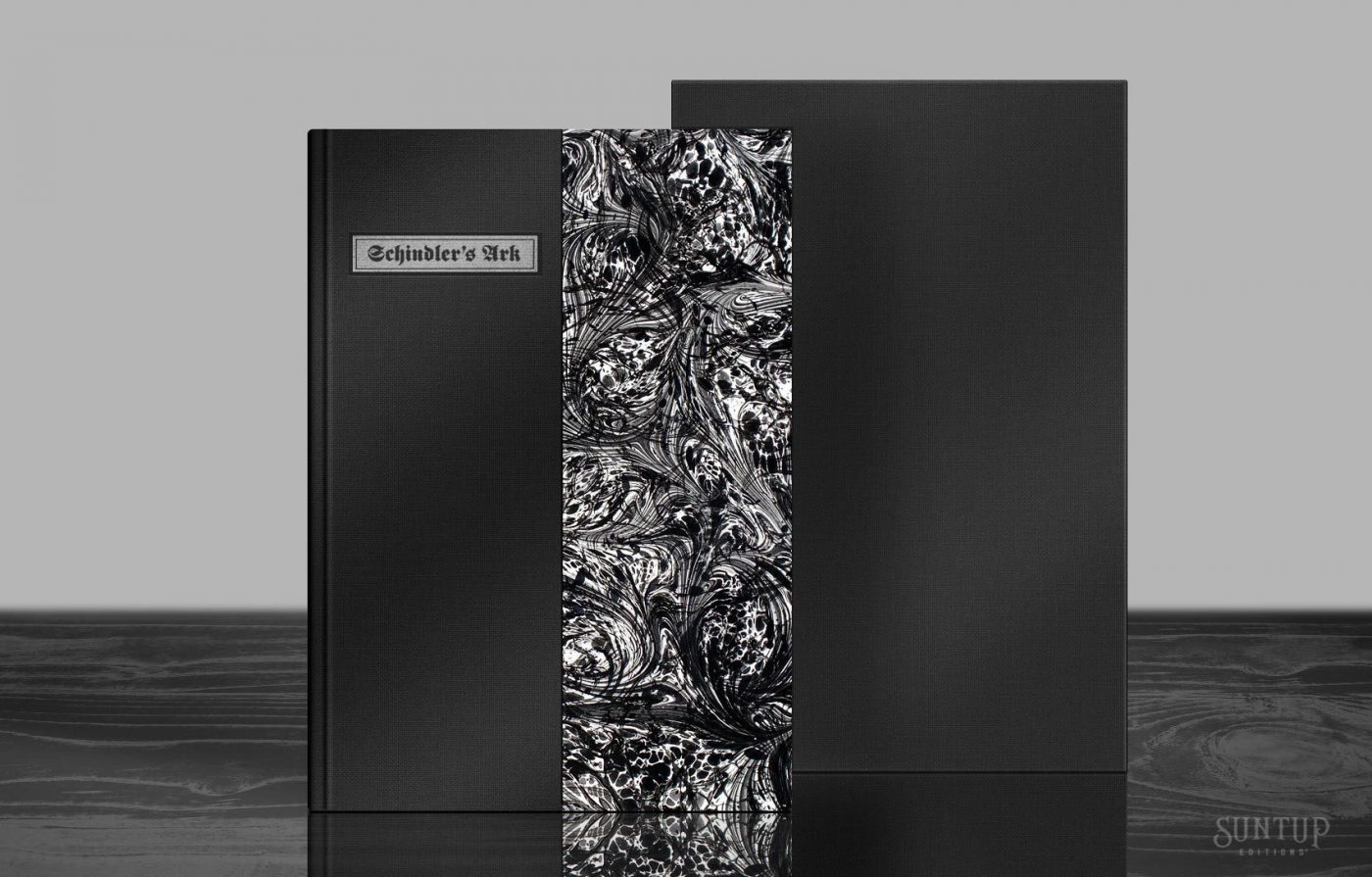 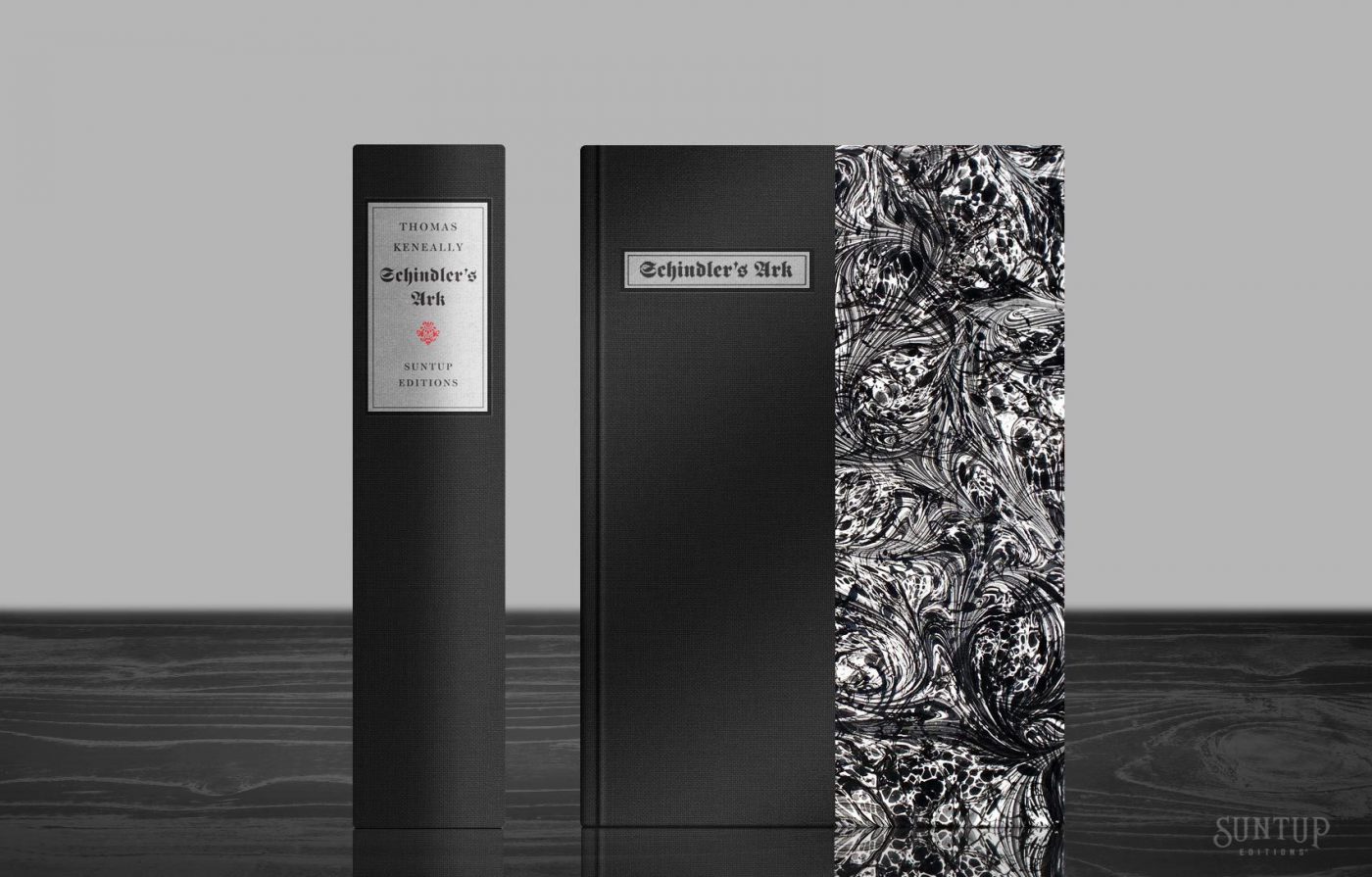 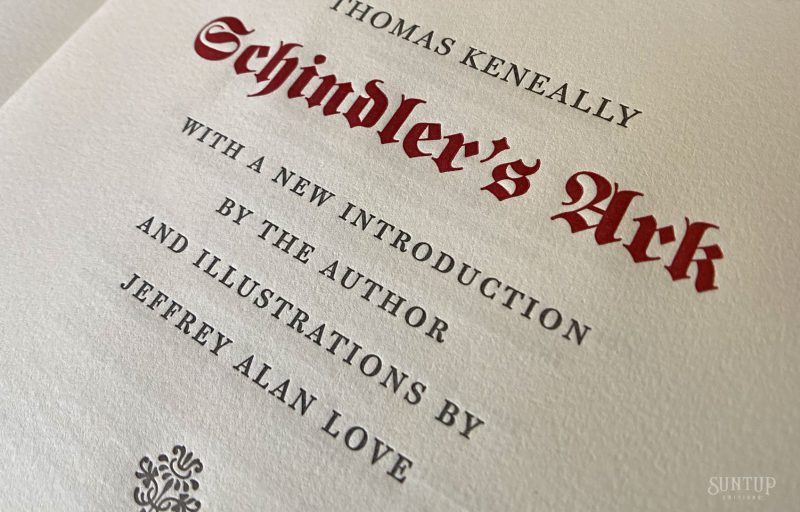 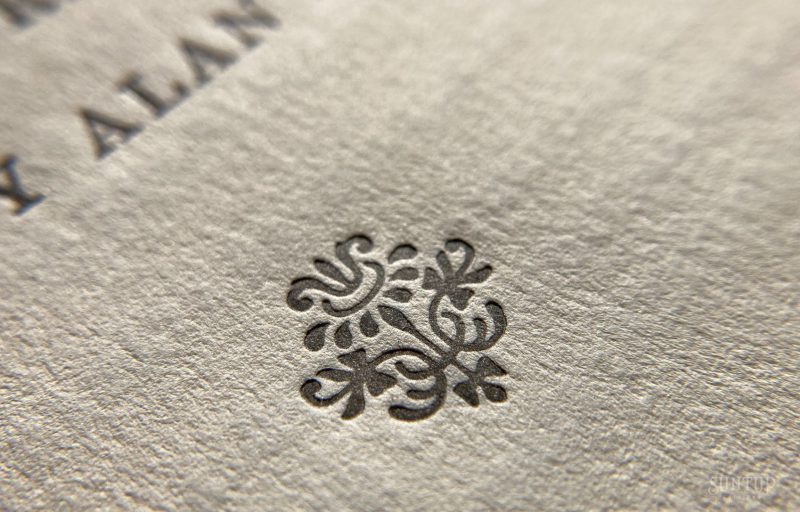 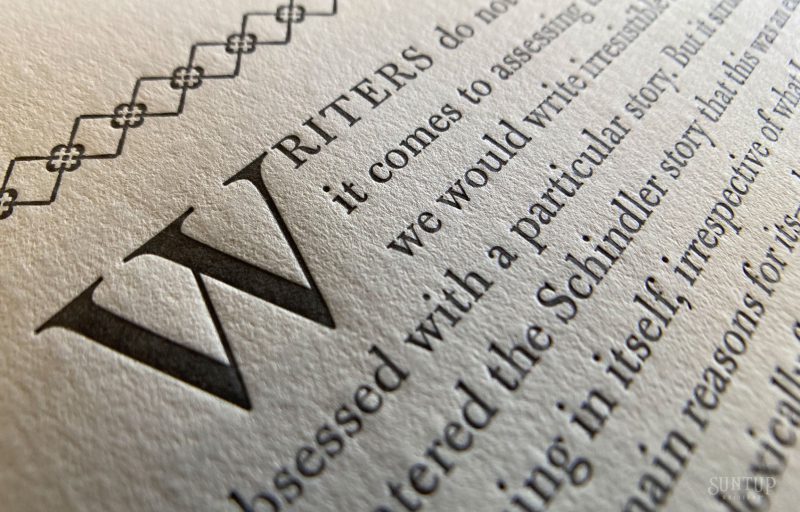 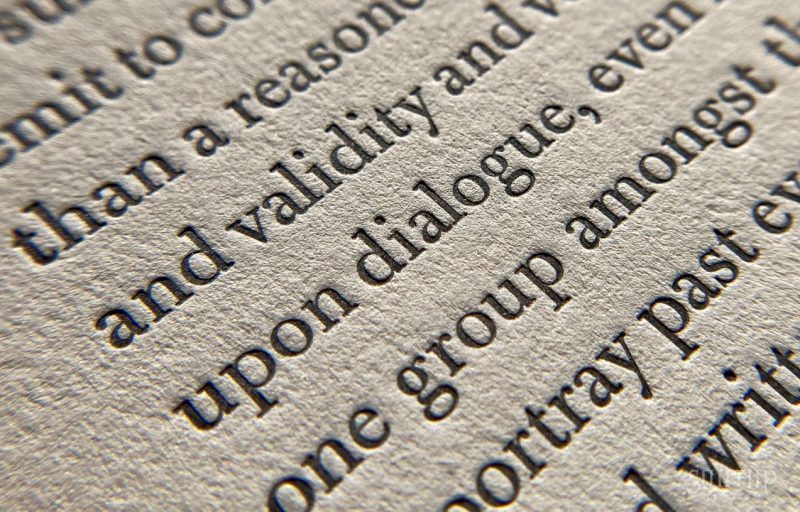 All editions include the following historically significant documents, appearing for the first time in any edition of the novel.

Included with every copy of the Lettered edition is a limited edition broadside printed on handmade paper by noted paper maker Izhar Neumann in Yanuh-Jat, Israel. The paper has been custom made for this edition and includes a custom watermark.

The broadside measures 8” x 12” and features a wood engraving by award-wining wood engraver Howard Phipps which is printed from the wood block. The broadside is printed on a hand press by Sandy Tilcock of Lone Goose Press in Eugene, Oregon.

The engraving is of a carob tree which was planted on the Avenue of the Righteous Among the Nations at Yad Vashem in honor of Oskar Schindler. 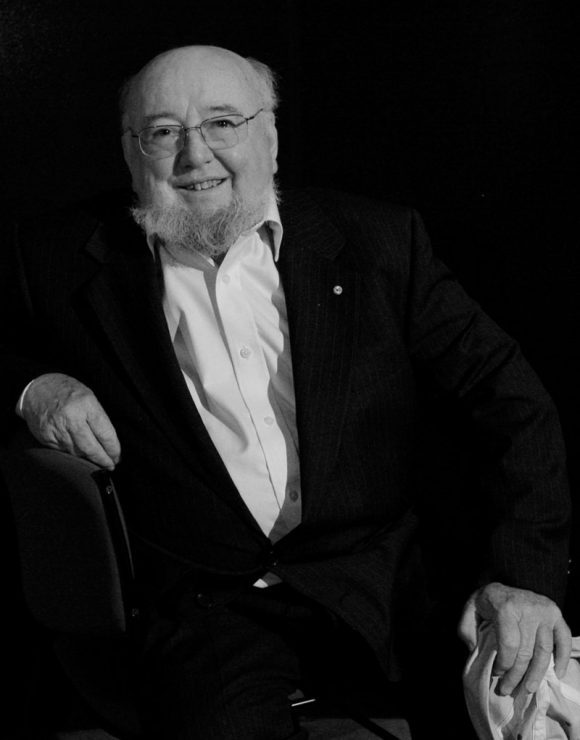 Thomas Keneally began his writing career in 1964 and has since published thirty-three novels, most recently Crimes of the Father, Napoleon’s Last Island, Shame and the Captives and the New York Times bestselling The Daughters of Mars. He is also the author of Schindler’s List, which won the Booker Prize in 1982, The Chant of Jimmie Blacksmith, Gossip from the Forest, and Confederates, all of which were shortlisted for the Booker Prize. He has also written several works of nonfiction, including his boyhood memoir Homebush Boy, The Commonwealth of Thieves and Searching for Schindler. He is married with two daughters and lives in Sydney, Australia. 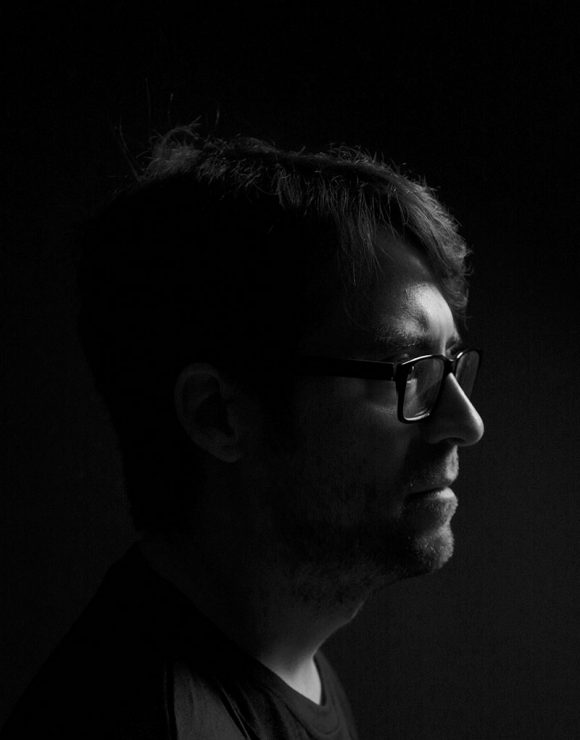 Jeffrey Alan Love is an award-winning artist and writer. He is the author of The Hero’s Quest, The Thousand Demon Tree, The Mountain of Smoke and Notes from the Shadowed City. Winner of the World Fantasy Award for Best Artist, the British Fantasy Award for Best Artist, a gold medal from the Society of Illustrators, two Silver Spectrum Fantastic Art Awards, two Zilveren Penselen (Silver Brush) Awards and two Academy of British Cover Design Awards, he has been nominated for the Kate Greenaway Medal, The British Science Fiction Award, the Locus Award, and the Chesley Award.

A Matching Pre-Order email is sent to owners of our previous publication, The Stepford Wives (Numbers 1-250) at 9:00 A.M. PT on the day of announcement. If you did not receive the email, contact us here. If your order is not received before the deadline, your designated number or letter will be assigned to the new owner. 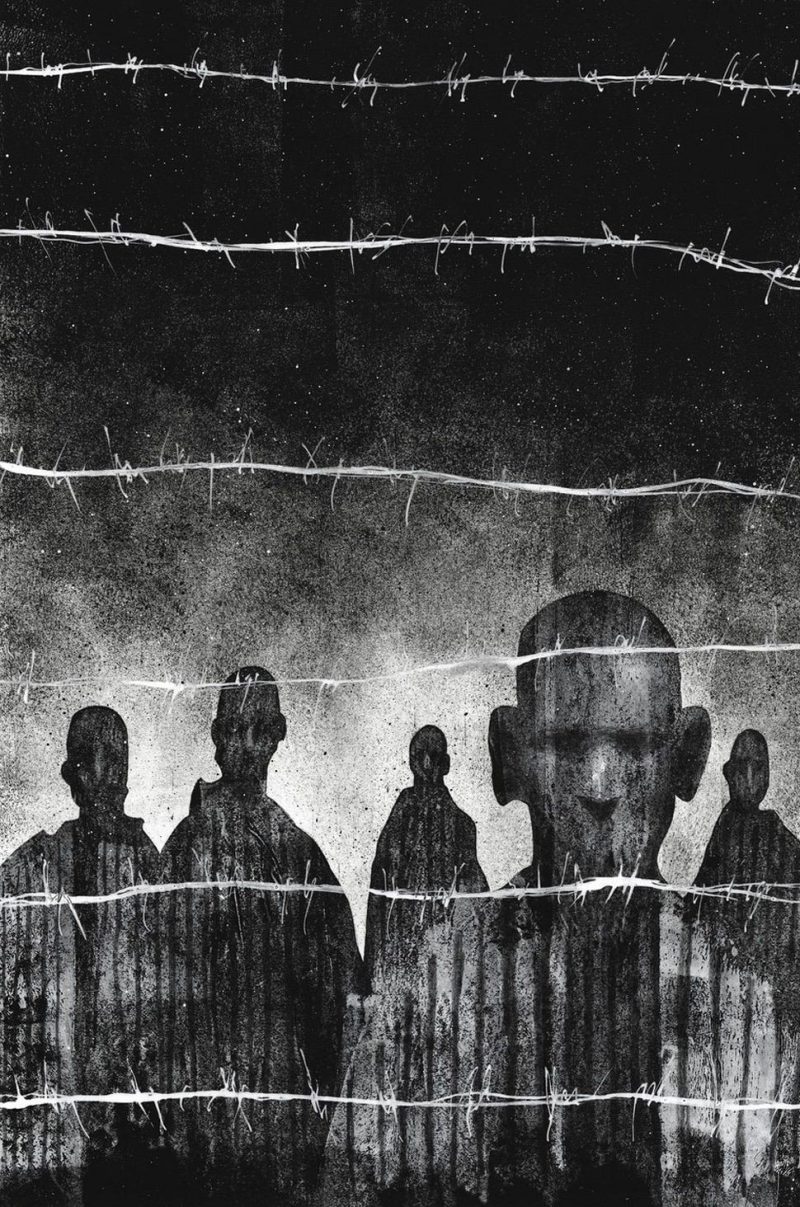 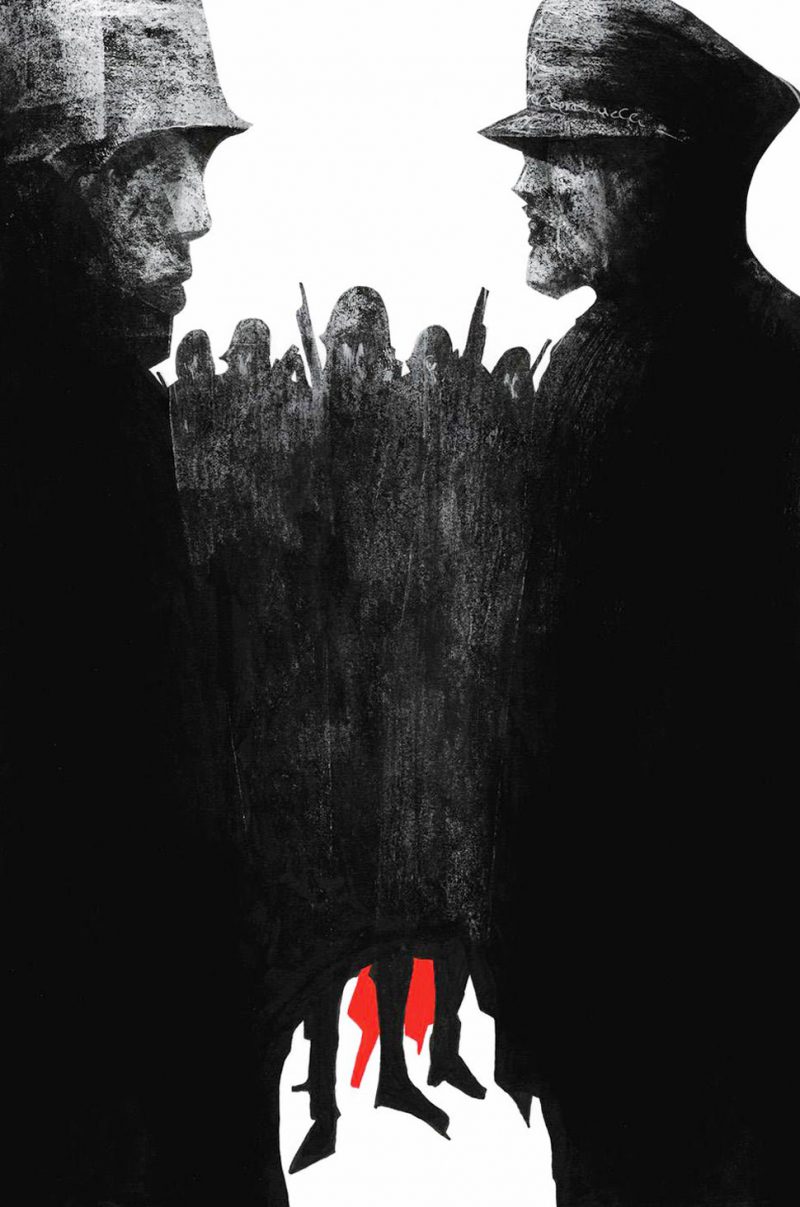 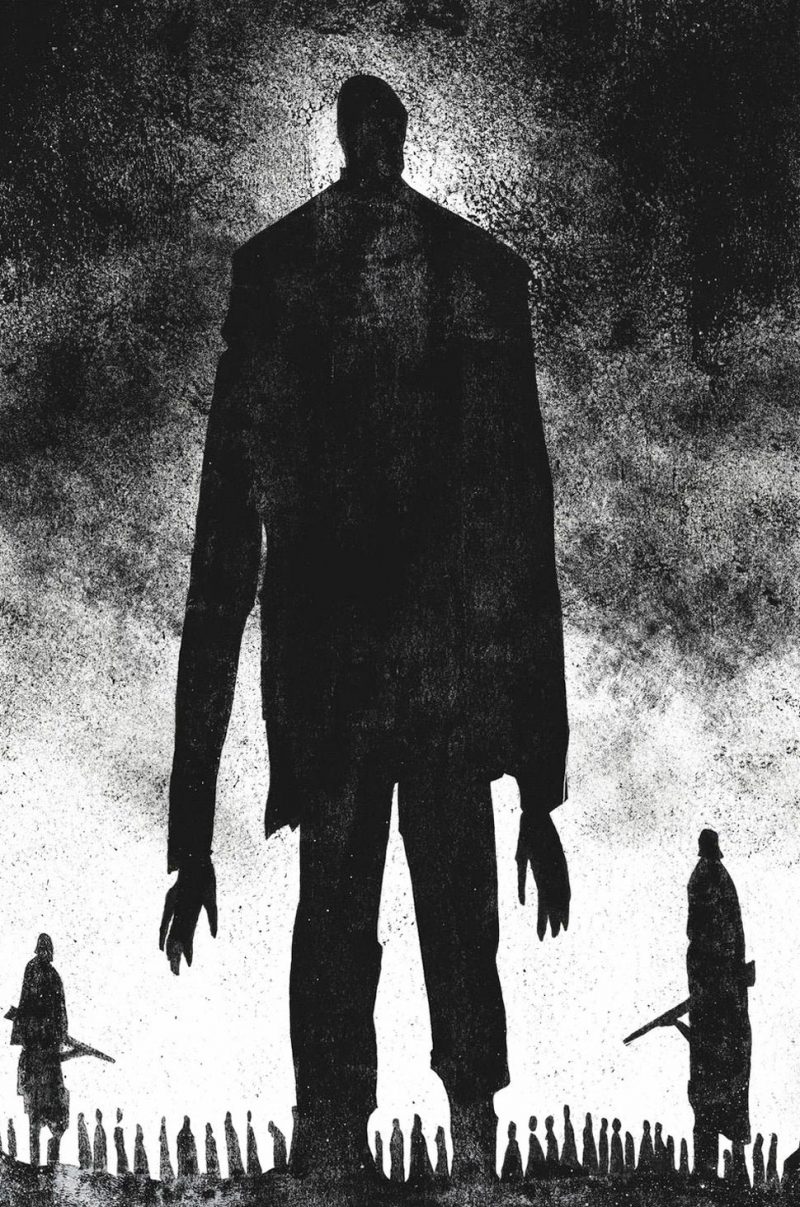 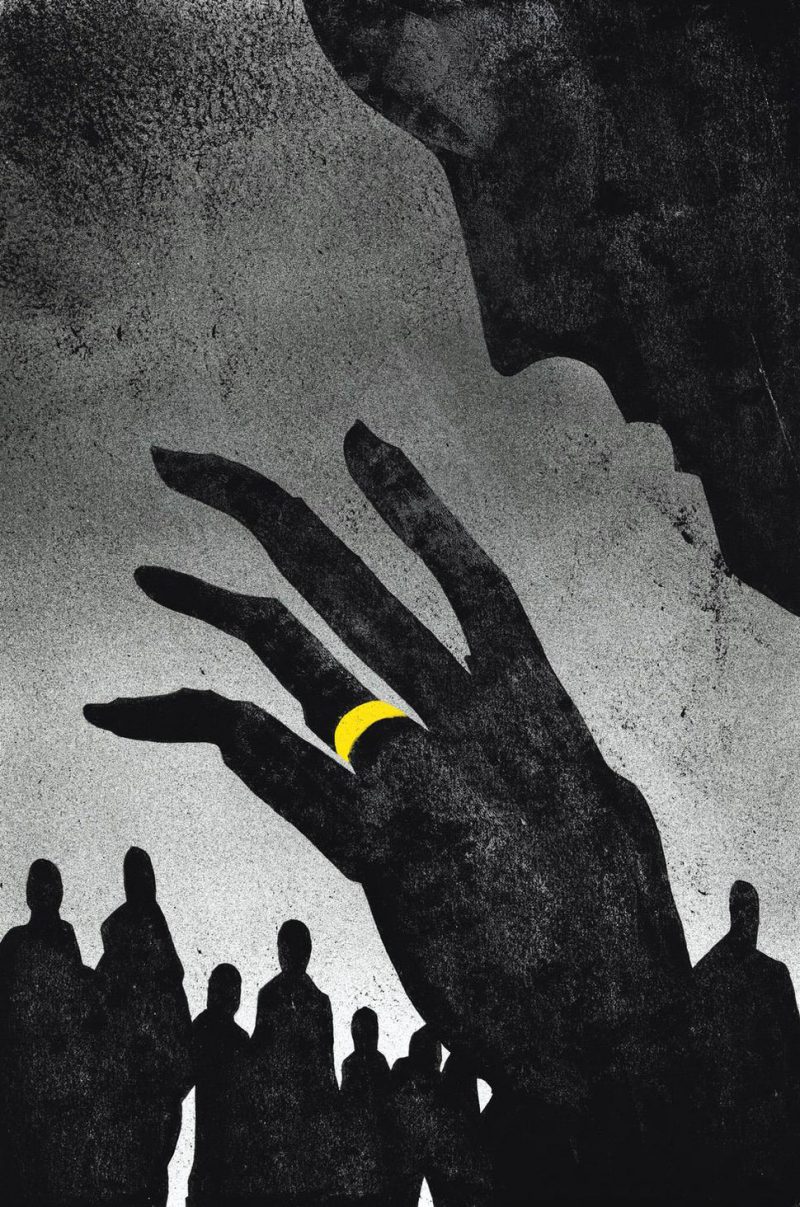