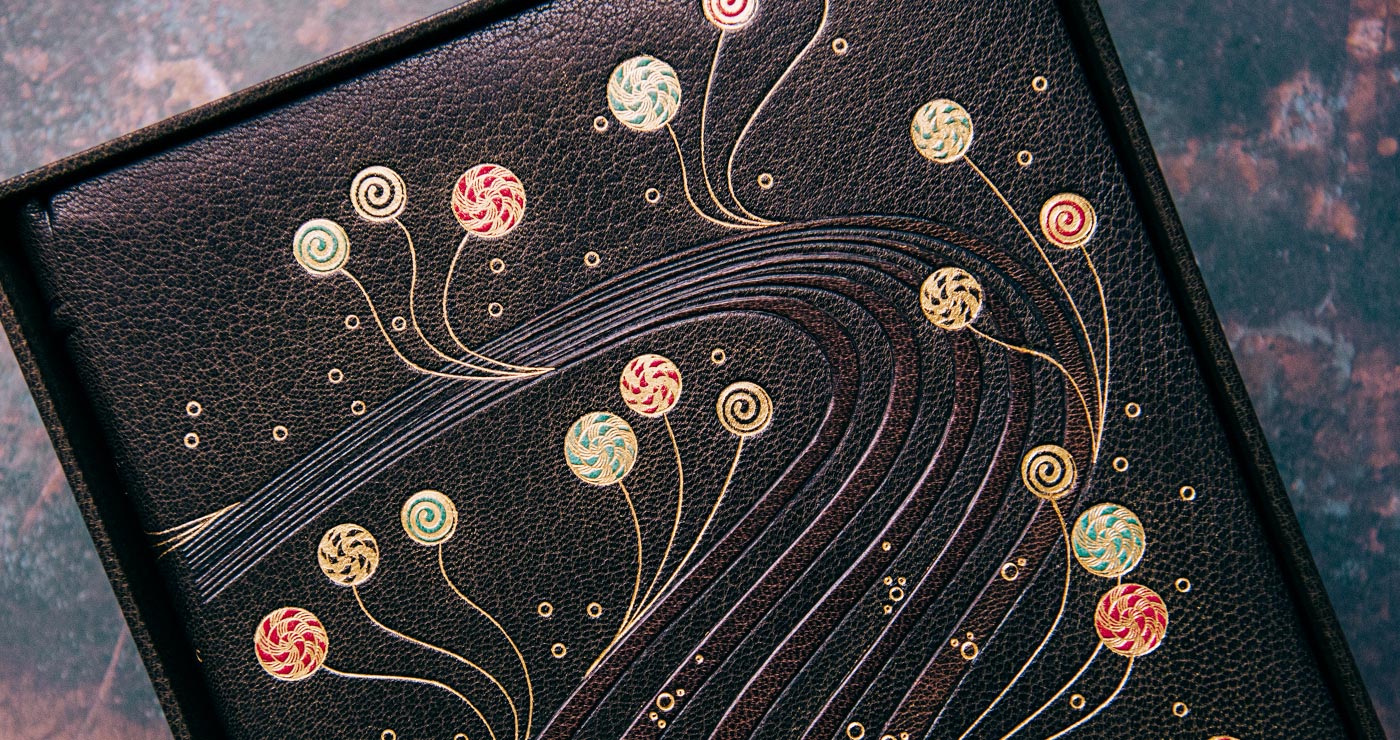 One of the most beloved children’s stories of the 20th century, Charlie and the Chocolate Factory by Roald Dahl is a masterpiece of pure imagination.

Willy Wonka’s famous chocolate factory is opening at last! But only five lucky children will be allowed inside. And the winners are: Augustus Gloop, an enormously fat boy whose hobby is eating; Veruca Salt, a spoiled-rotten brat whose parents are wrapped around her little finger; Violet Beauregarde, a dim-witted gum-chewer with the fastest jaws around; Mike Teavee, a toy pistol-toting gangster-in-training who is obsessed with television; and Charlie Bucket, our hero, a boy who is honest and kind, brave and true, and good and ready for the wildest time of his life!

First published in 1964, the dark humor and cheerful gruesomeness of Charlie and the Chocolate Factory immediately endeared the book to children, making it an instant bestseller. Rarely has a tale of morality ever been more deliciously entertaining to read, as Roald Dahl’s story warns children and adults alike of the dangers of bad parenting, spoiling children, and self-indulgence.

Dahl drew inspiration for the story from his own childhood. In the 1920s, chocolate makers in England would frequently send samples to school children in exchange for their opinions on new products. Two of the largest competing chocolate companies, Cadbury and Rowntree, would send spies posing as employees to discover the other’s trade secrets. As a result, the companies became highly protective of their chocolate making process. It was a combination of this secrecy and the elaborate, often gigantic, machines in the factory that inspired the author to write his story.

The limited edition of Charlie and the Chocolate Factory by Roald Dahl is presented in four states: Artist, Numbered, Lettered and Roman Numeral. The editions are oversized at 7” x 10” and feature over 50 color illustrations by Quentin Blake; a new exclusive introduction by Donald Sturrock, author of the critically acclaimed biography of Roald Dahl; and over 60 pages of bonus content. Also included is a note by Paul Suntup. All editions are printed full color throughout.

The text pages are set in Centaur and Koch Antiqua types, and the Numbered, Lettered & Roman Numeral editions are printed letterpress with a spot color throughout by Bradley Hutchinson on a Heidelberg Cylinder in Austin, Texas. The letterpress editions are signed by Donald Sturrock and Paul Suntup. The Artist edition is printed offset and is signed by Sue Gent, who created the illustrated slipcase wrap.

The Artist edition is limited to 1250 copies. It is a full cloth, smyth sewn binding with an embossed cover. Printed offset on archival Cougar Natural, the Artist edition features a foil stamped dust jacket resembling a Wonka’s Whipple-Scrumptious Fudgemallow Delight candy bar wrapper (the only edition featuring the dust jacket). It is housed in an illustrated paper covered slipcase. 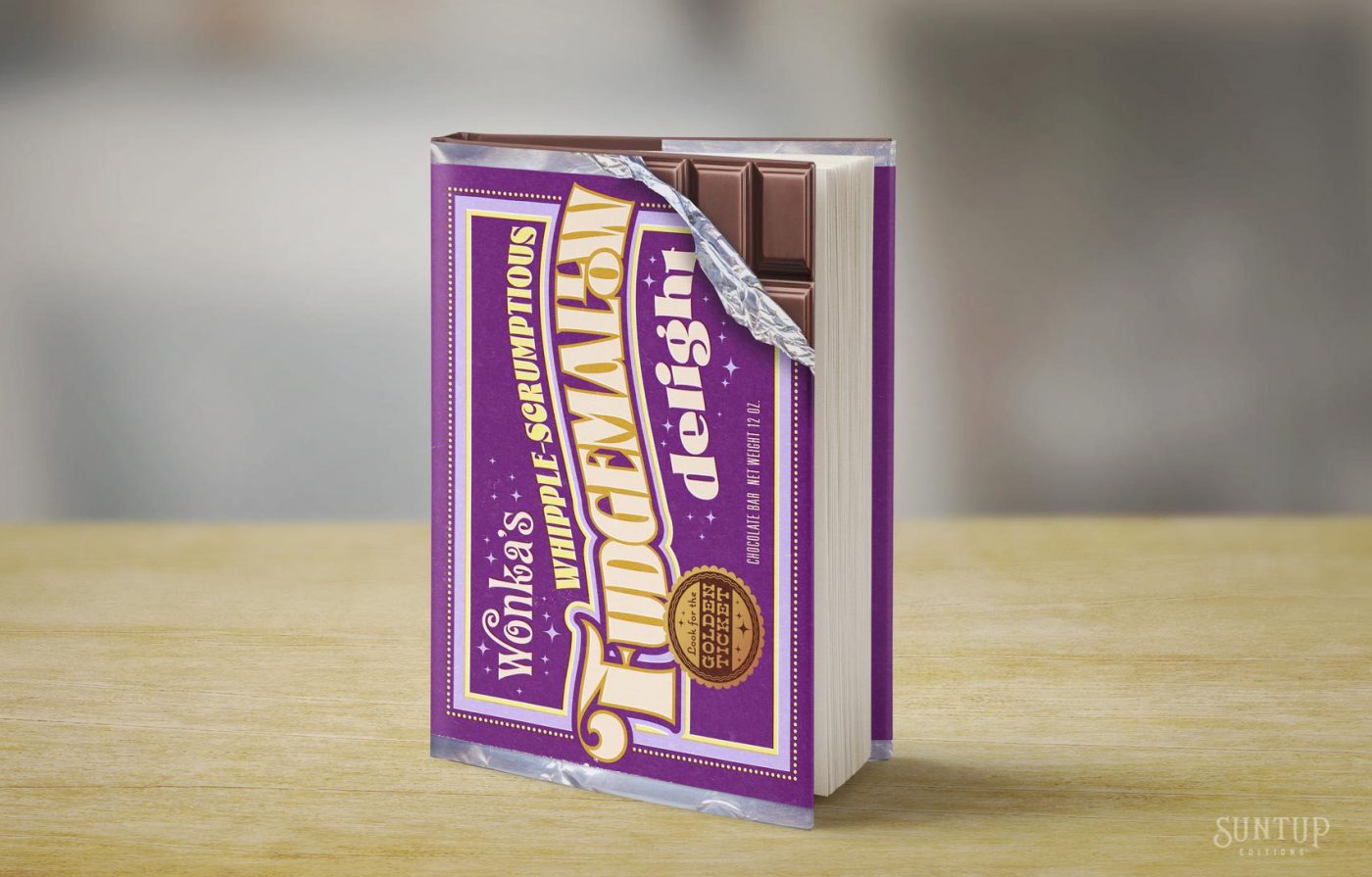 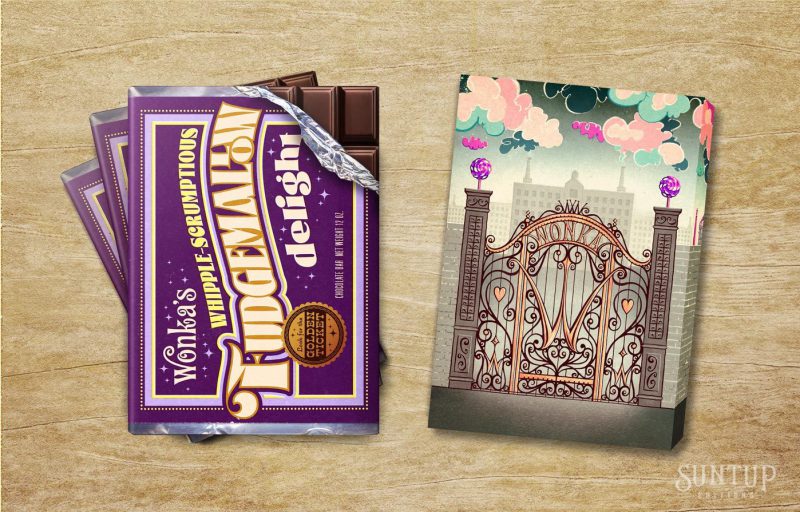 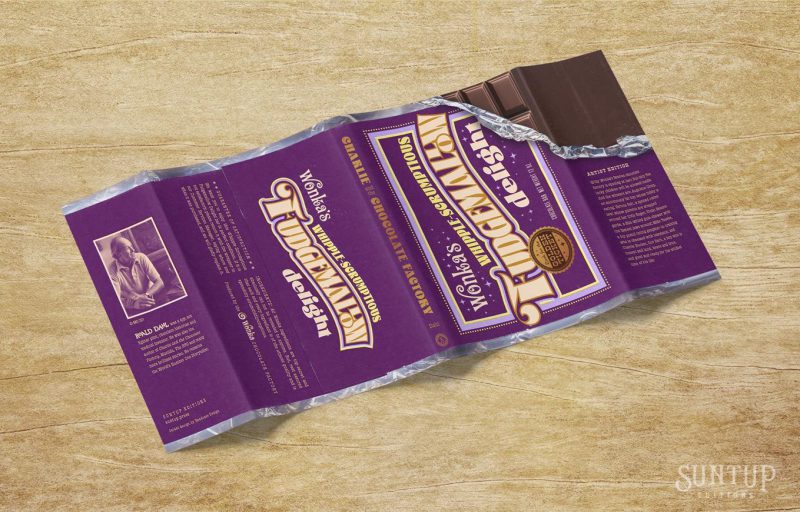 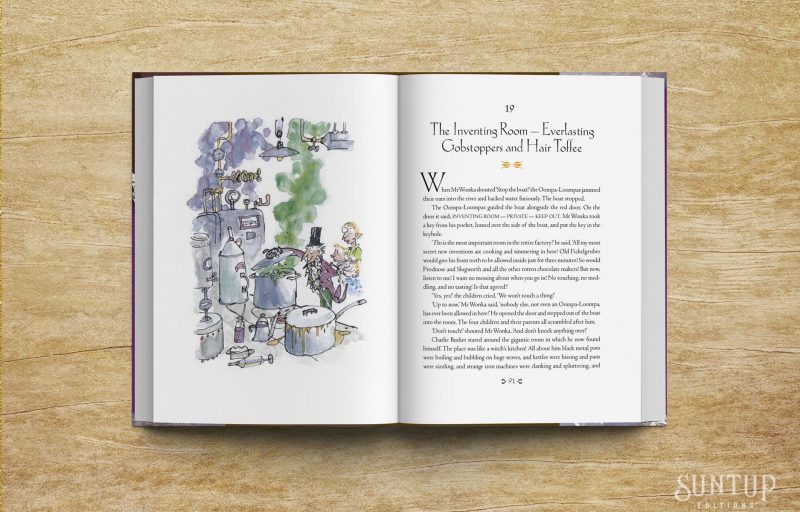 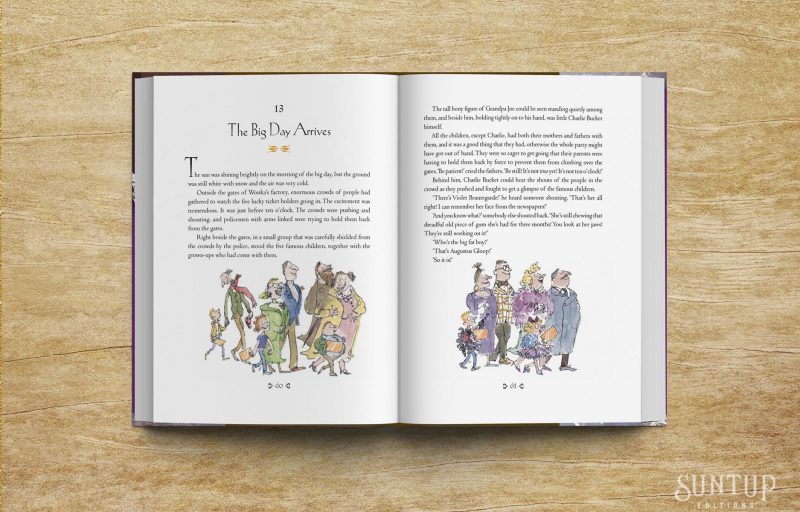 The Numbered edition is limited to 350 copies and is a full leather handmade Bradel binding with gold leather adorning the spine and brown leather boards with a debossed front cover. The edition is printed letterpress on Mohawk Via with a spot color throughout. The color illustrations are printed offset. The edition is housed in a gate fold clamshell enclosure covered in Japanese cloth and lined with suede. The edition is signed by Donald Sturrock and Paul Suntup. 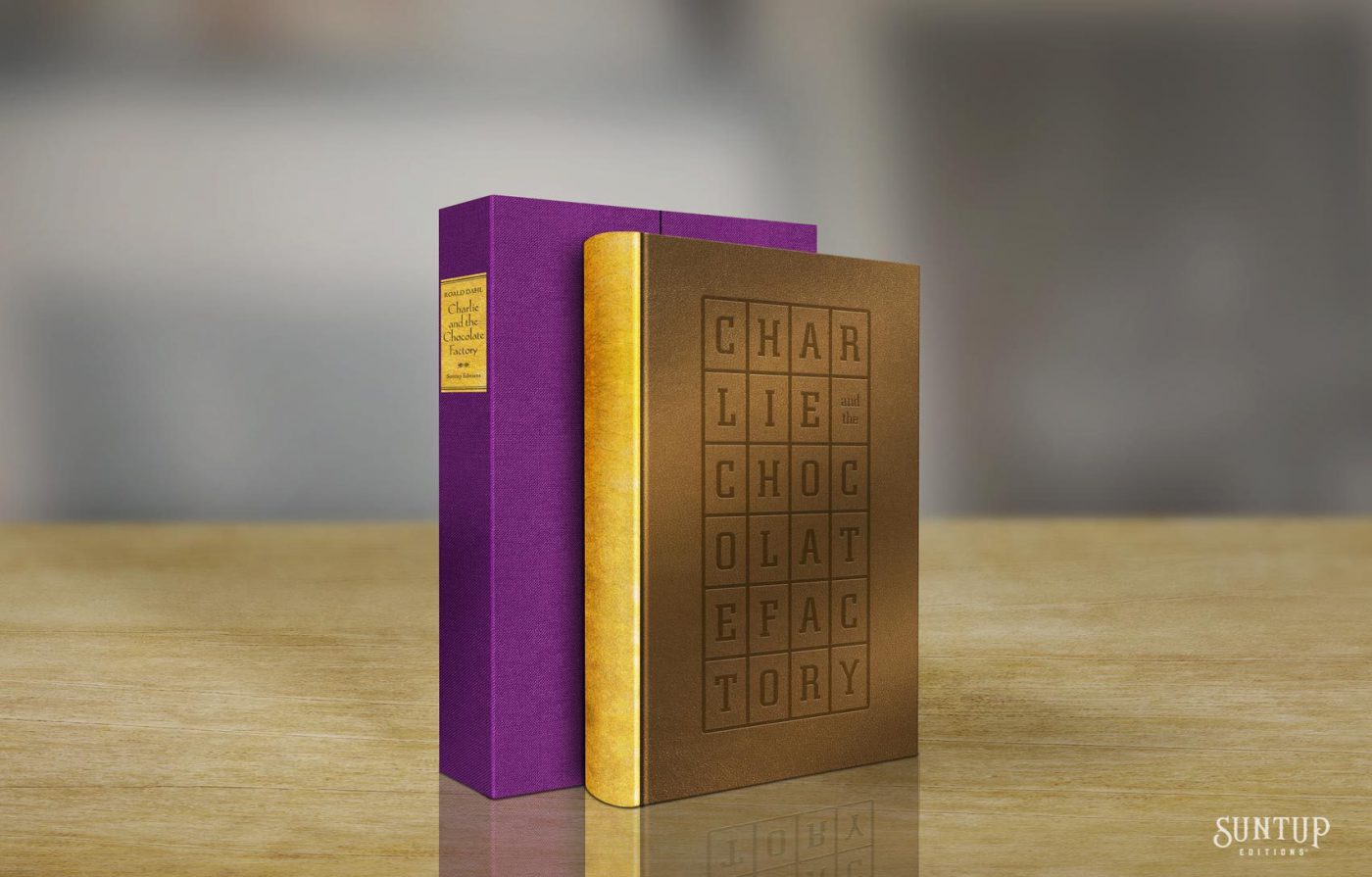 The Lettered edition is limited to 26 copies and is a full goatskin binding with a custom handmade leather covered chocolate bar inset into the front cover. The edition is printed letterpress on Rives Heavyweight mouldmade paper with a spot color throughout and featuring deckled edges. The color illustrations are printed offset. The edition is housed in a handmade wooden box with laser cut metal gates affixed to the cover, and velvet lined floors. Endsheets are hand marbled for this edition and it is signed by Donald Sturrock and Paul Suntup. The edition is handbound by Peter Geraty at Praxis Bindery in Easthampton, Massachusetts. 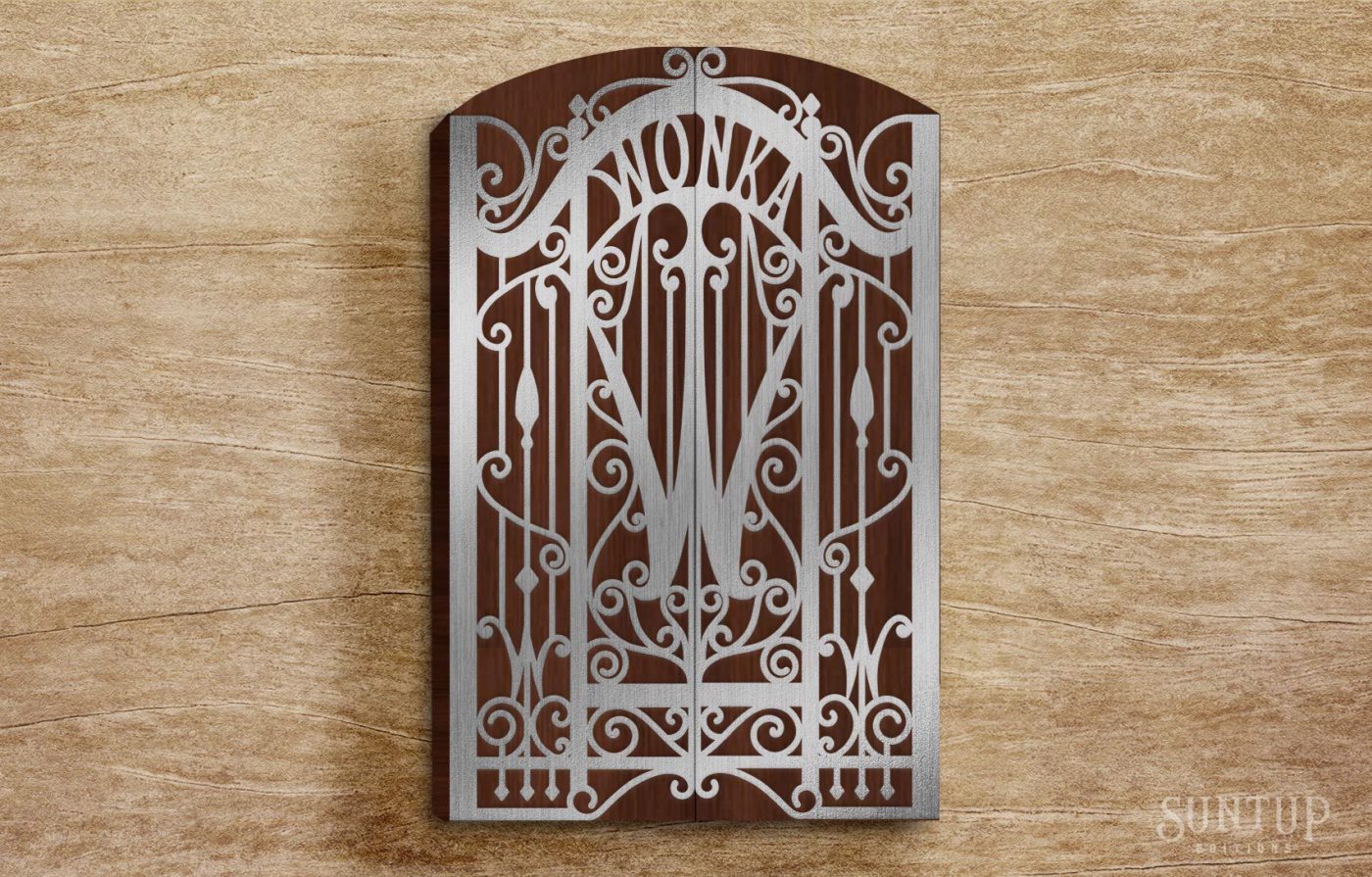 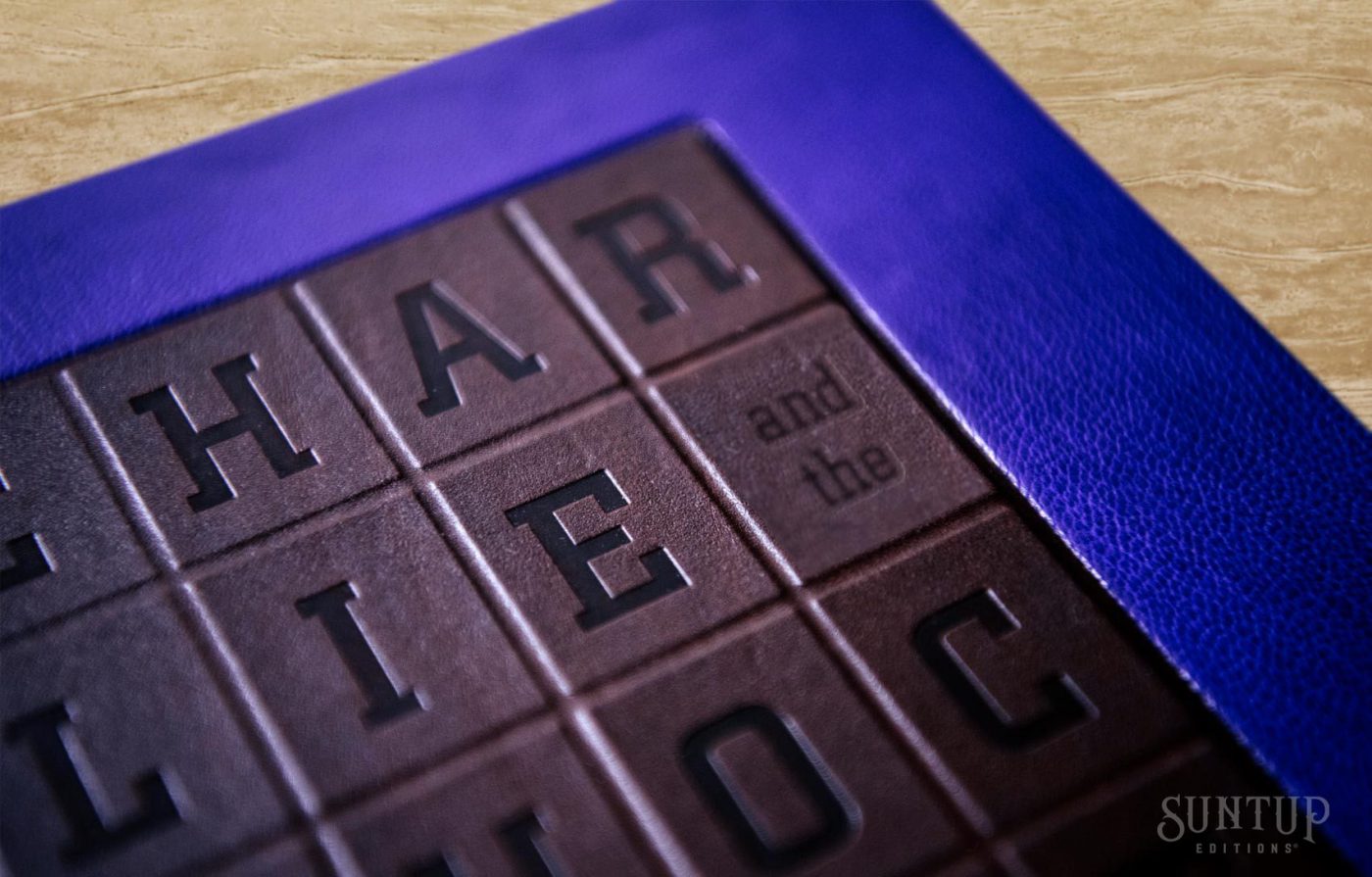 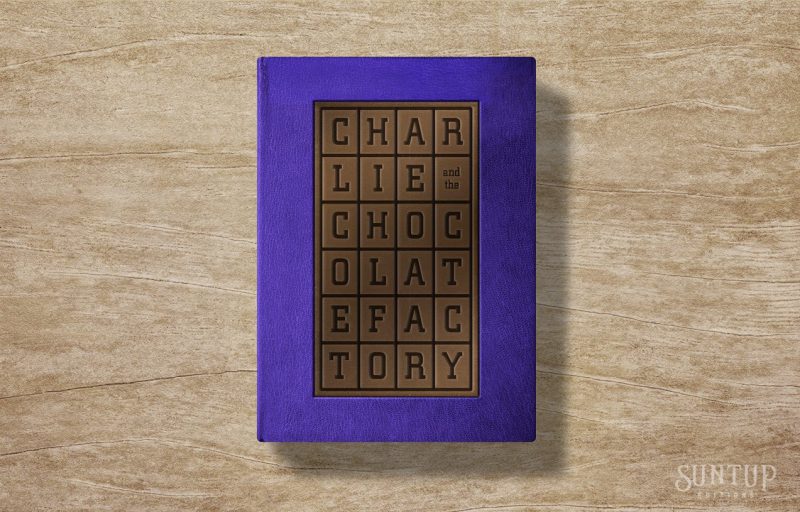 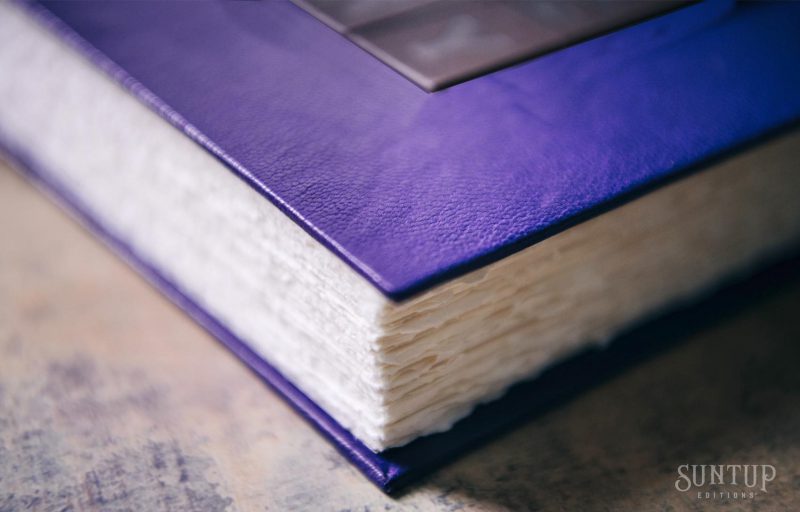 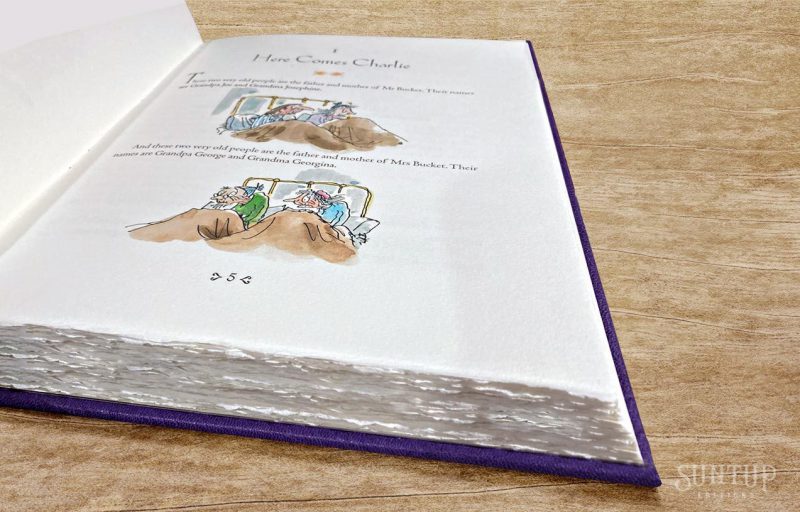 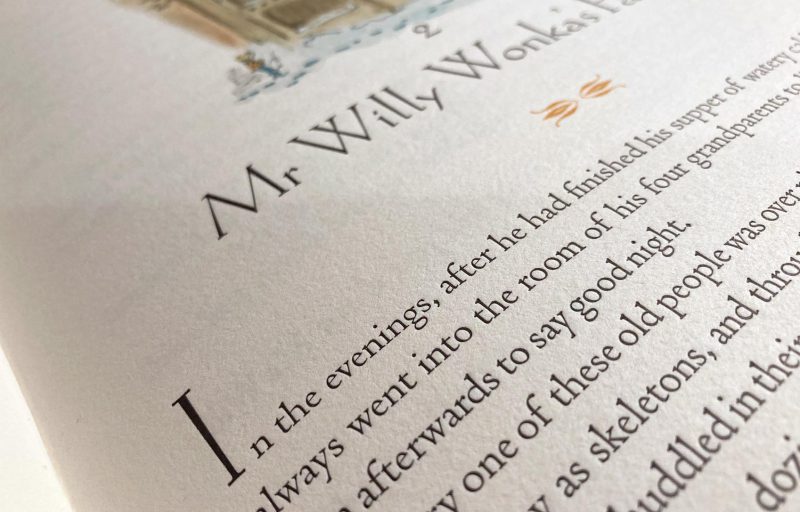 The Roman Numeral edition is limited to 10 copies numbered I-X. The book is section sewn by hand on pure linen tapes with linen thread. The endpapers have been designed specifically for this edition and are screen printed on Canary Yellow Canson Mi-Teintes 130gsm paper with a leather joint offering strength and flexibility.

The spine is lined with linen and acid-free paper, and the boards of the cover are acid-free laminated millboard which have been sanded to create a cushioned effect. The endbands are handsewn with colored silk threads woven around a core to support the head and tail caps. The edges have been sanded, gilt and burnished by hand with 24ct genuine gold leaf.

The leather is vegetable tanned goatskin pared by hand to create a seamless and smooth finish. All cover decoration is tooled by hand with specially made individual brass tools on 24ct genuine gold leaf, with onlays of pink and green leather to represent candy. The river of chocolate has been created with varying shades of brown leather and blind tooling. All lettering has been carried out with individual hand letters.

The “chocolate box” style enclosure is covered in specially dyed vegetable tanned goatskins, with a hand tooled label in gold leaf and leather onlays. It is lined in suede with a lifting panel and satin ribbon pull to allow easy access to the book.

The edition is printed letterpress on Rives Heavyweight mouldmade paper with a spot color throughout. The color illustrations are printed offset. It is signed by Donald Sturrock and Paul Suntup, and is hand crafted by Shepherds, Sangorski & Sutcliffe in London, United Kingdom. 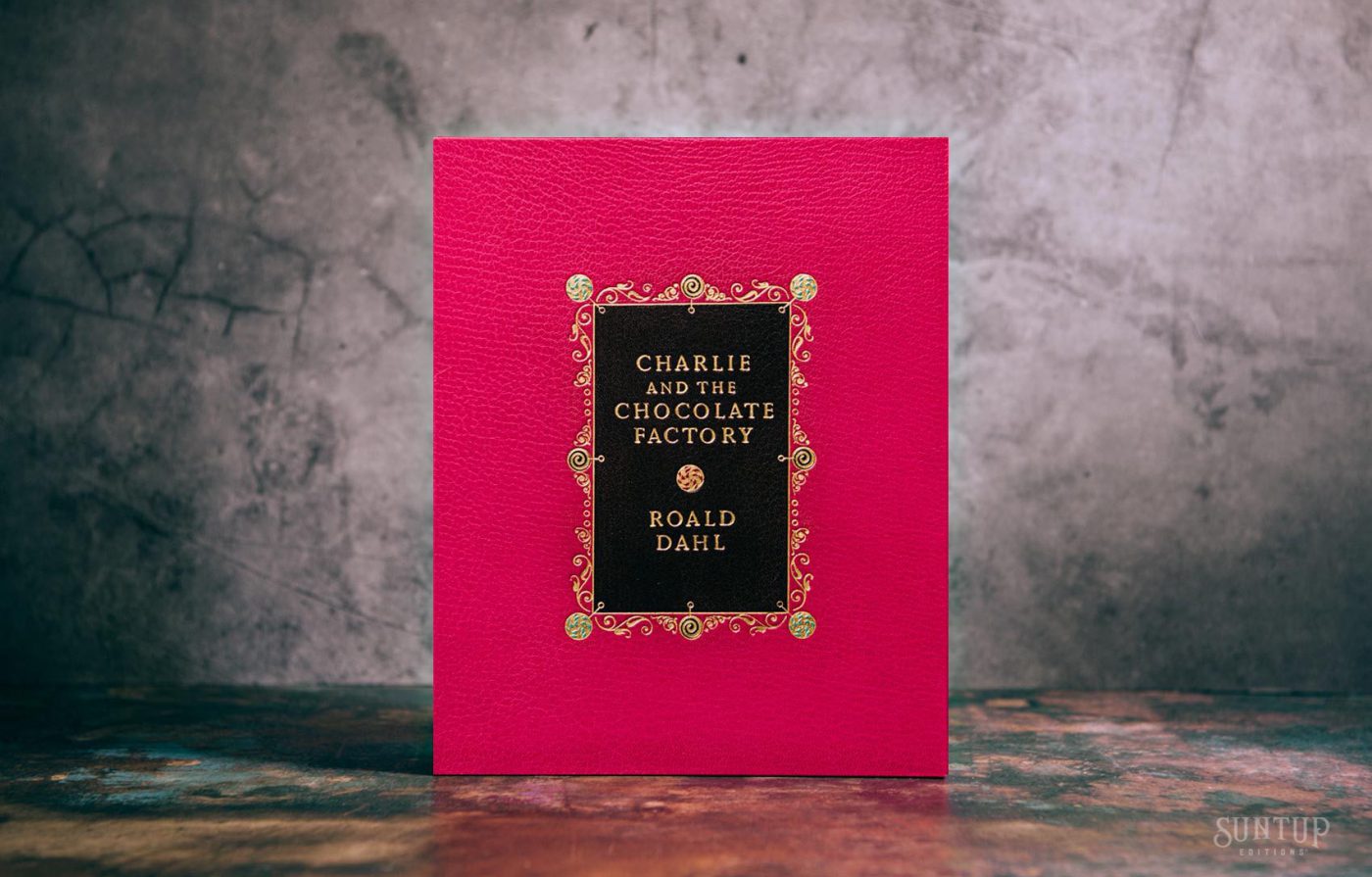 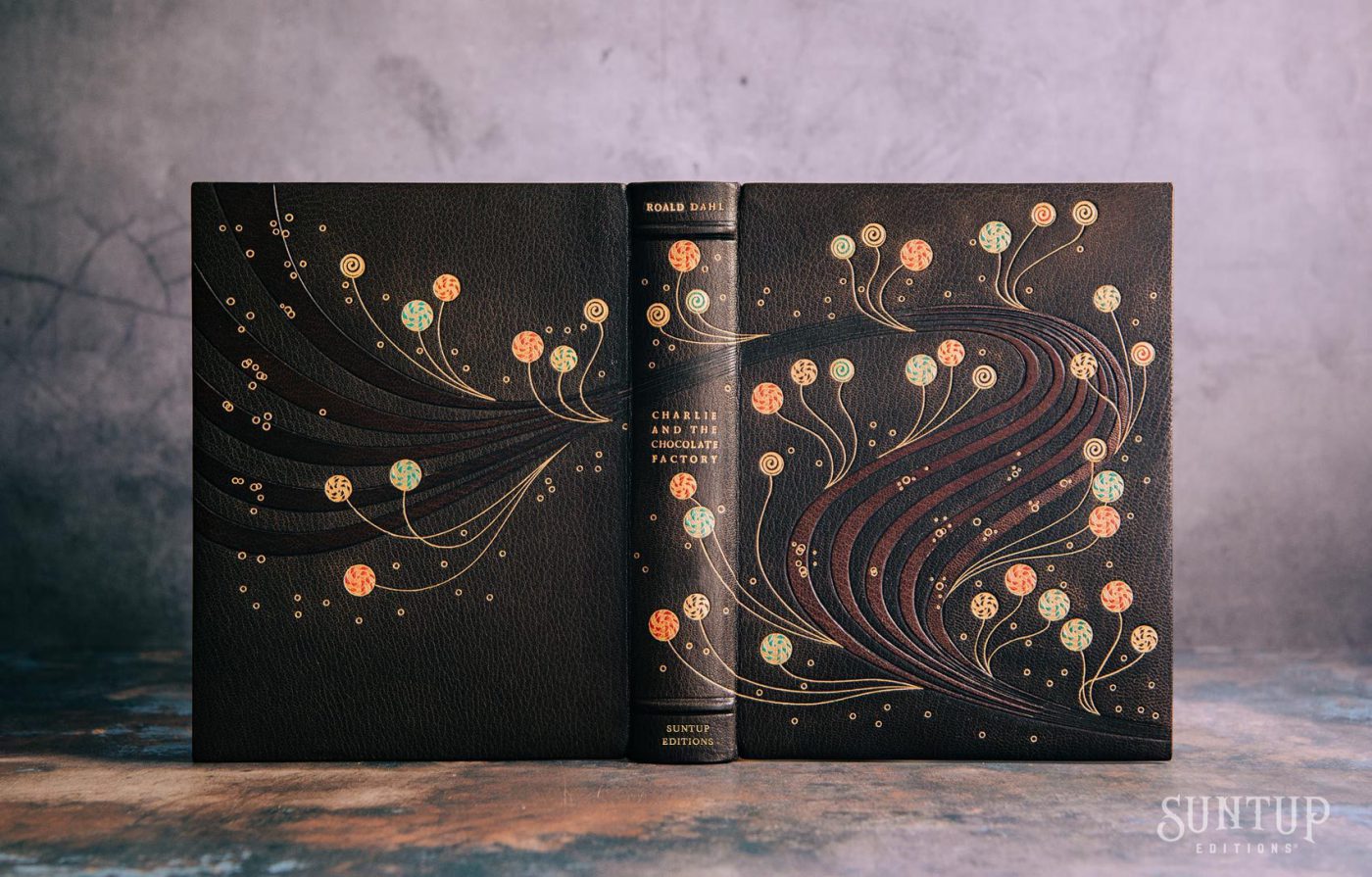 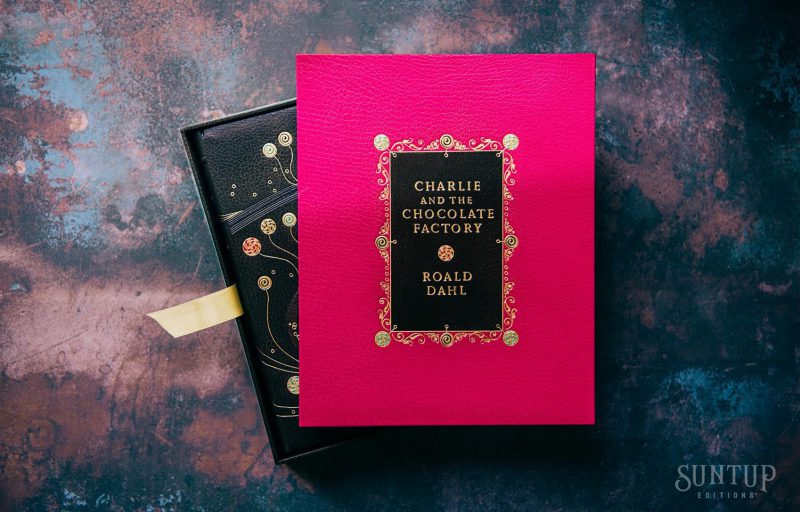 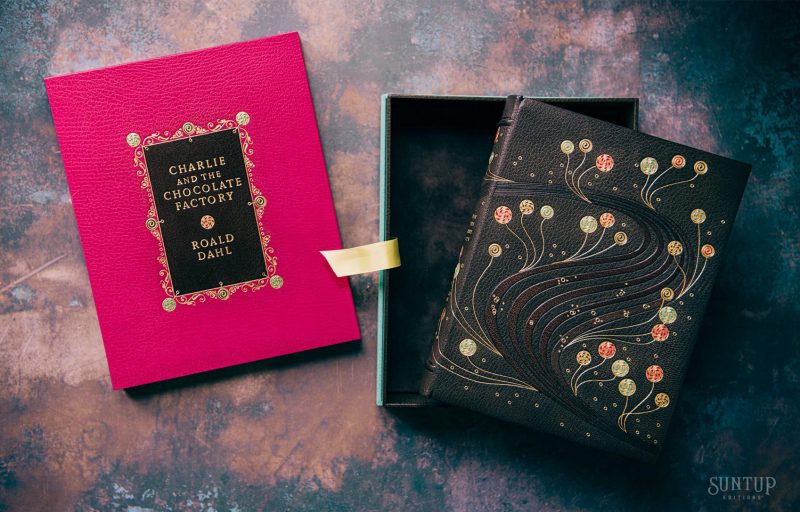 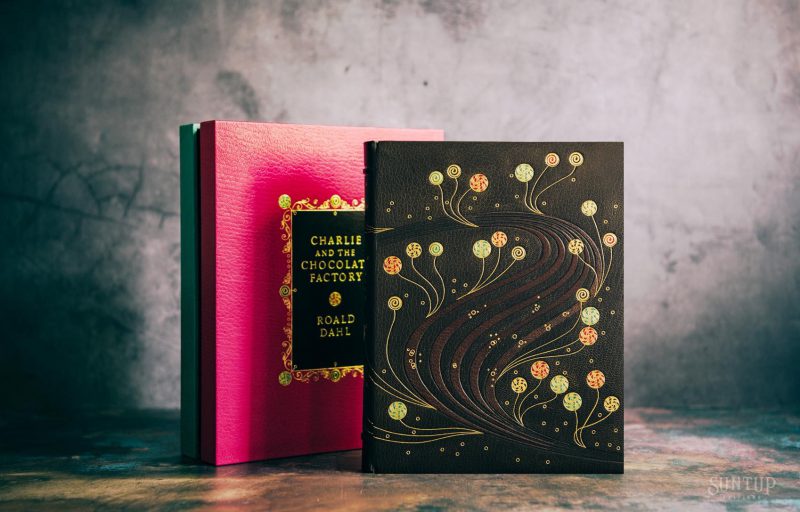 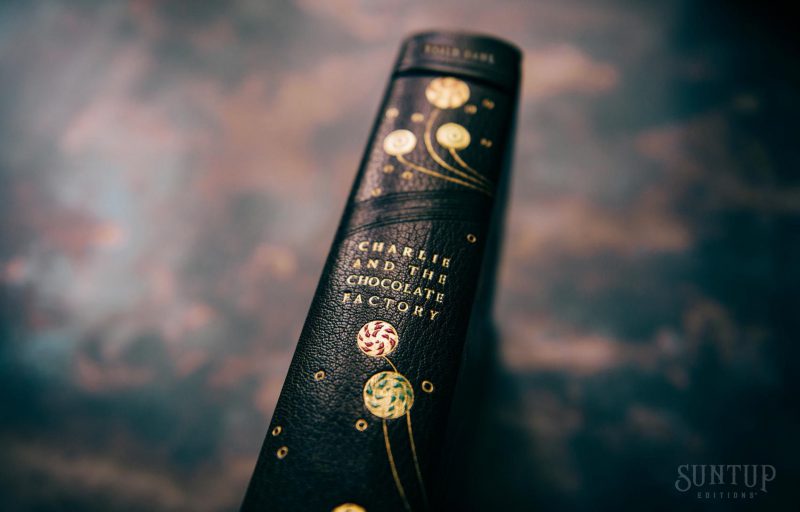 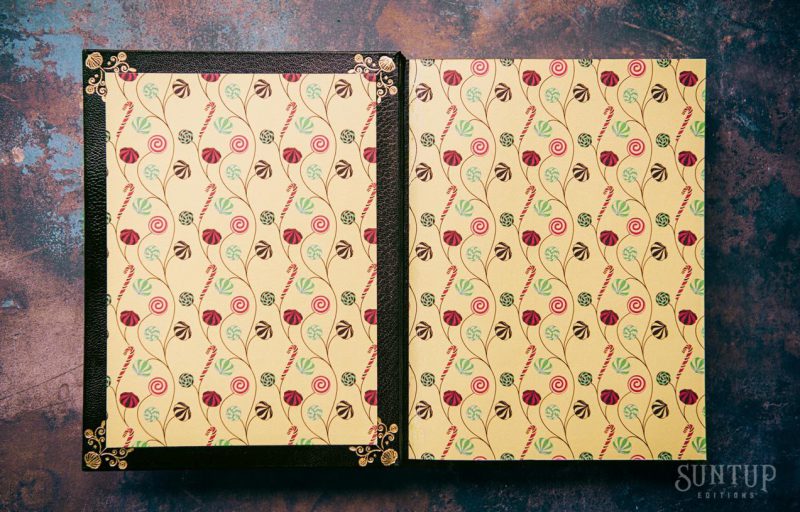 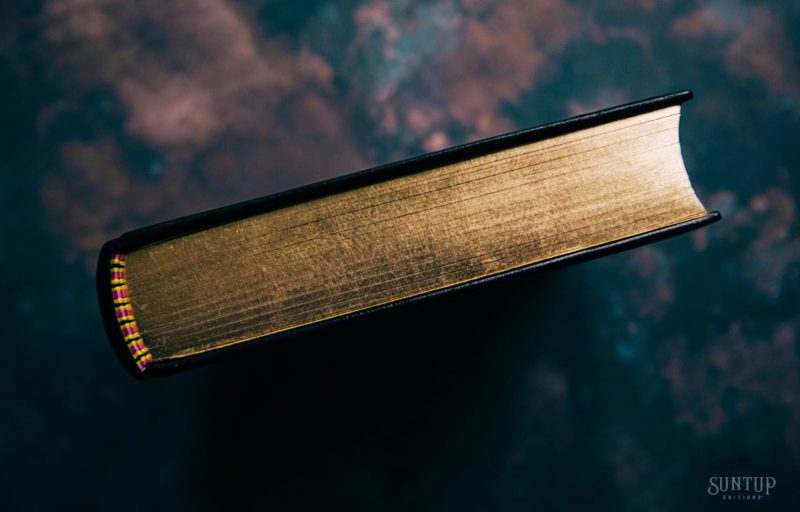 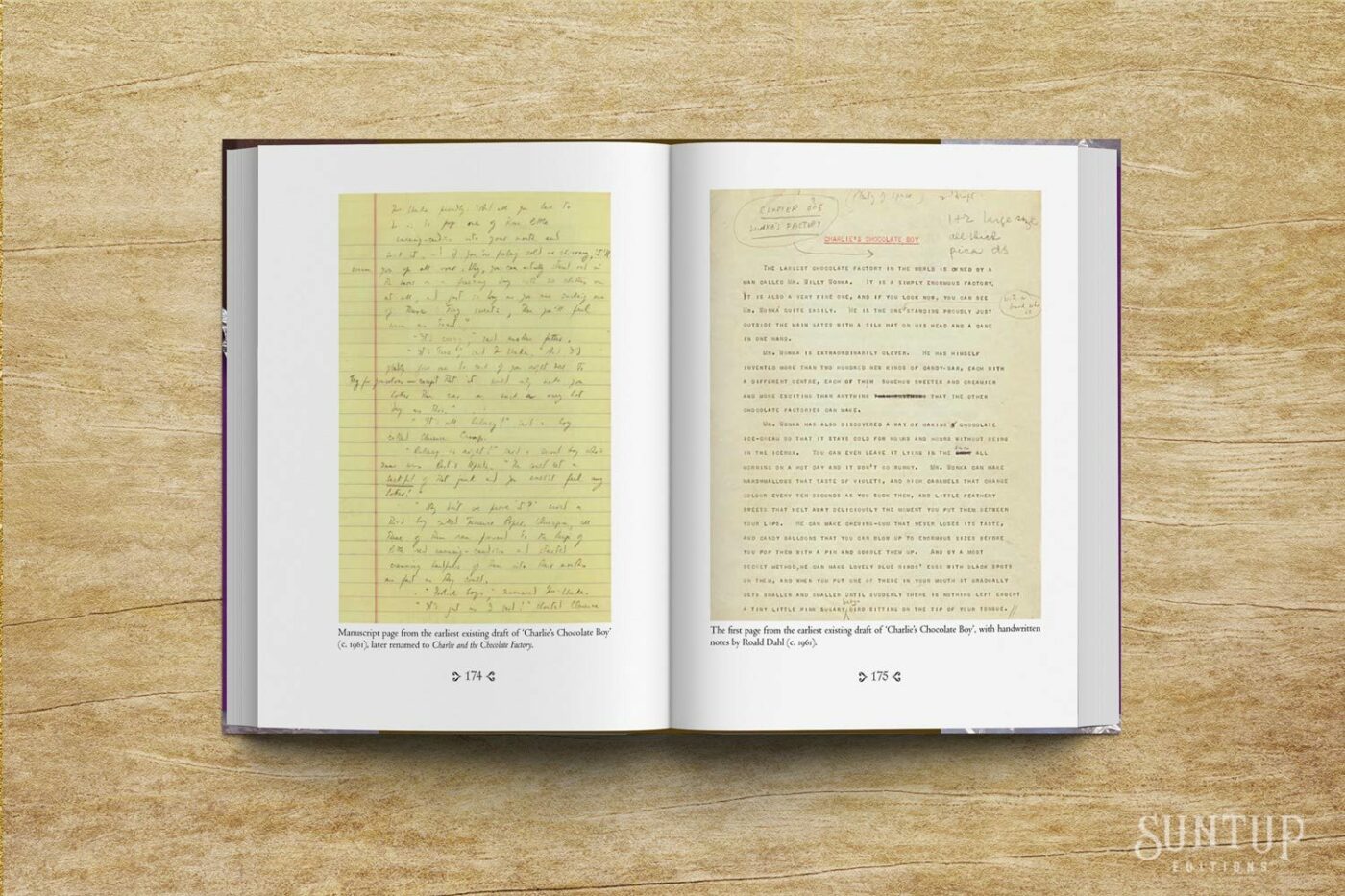 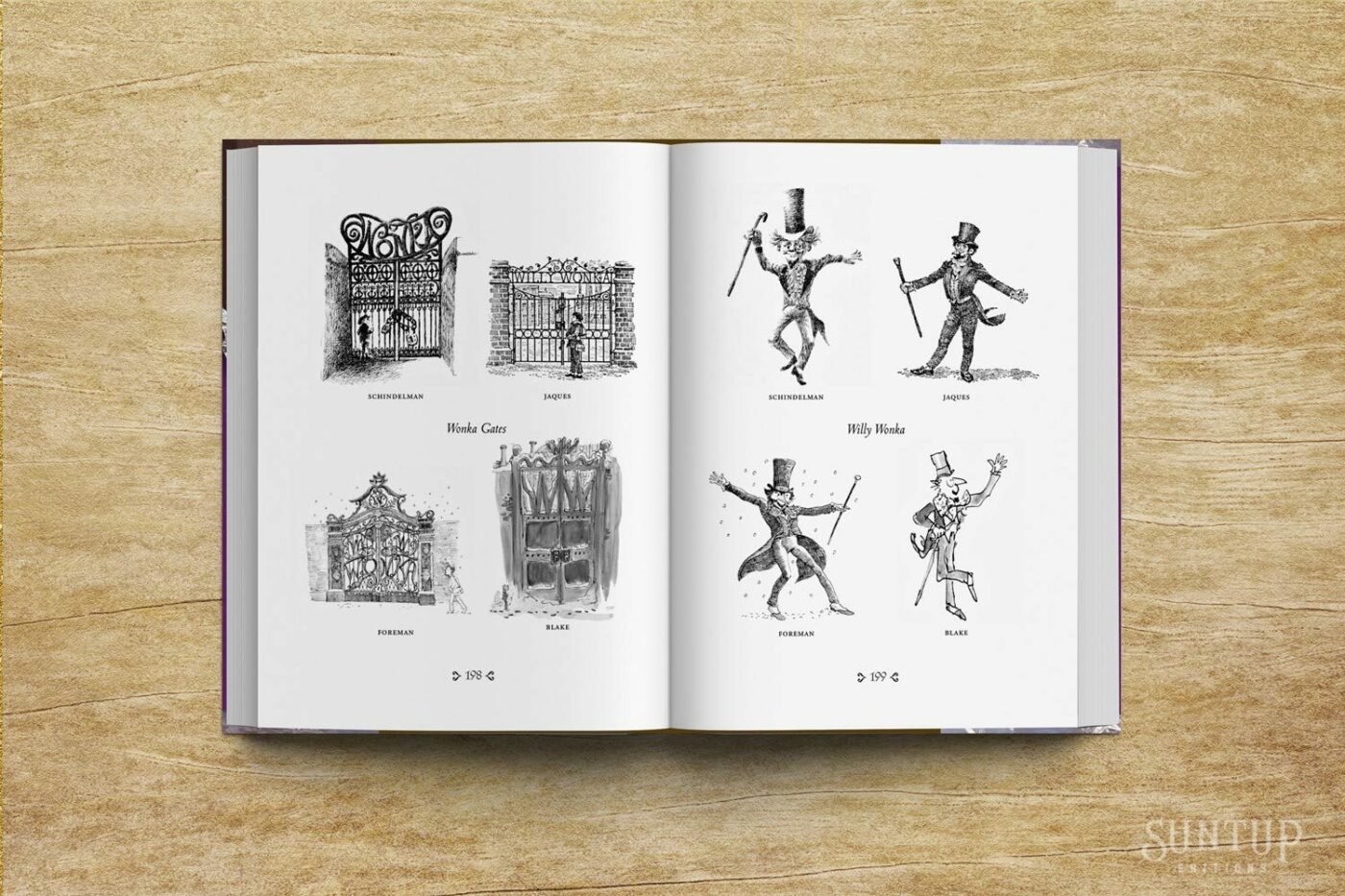 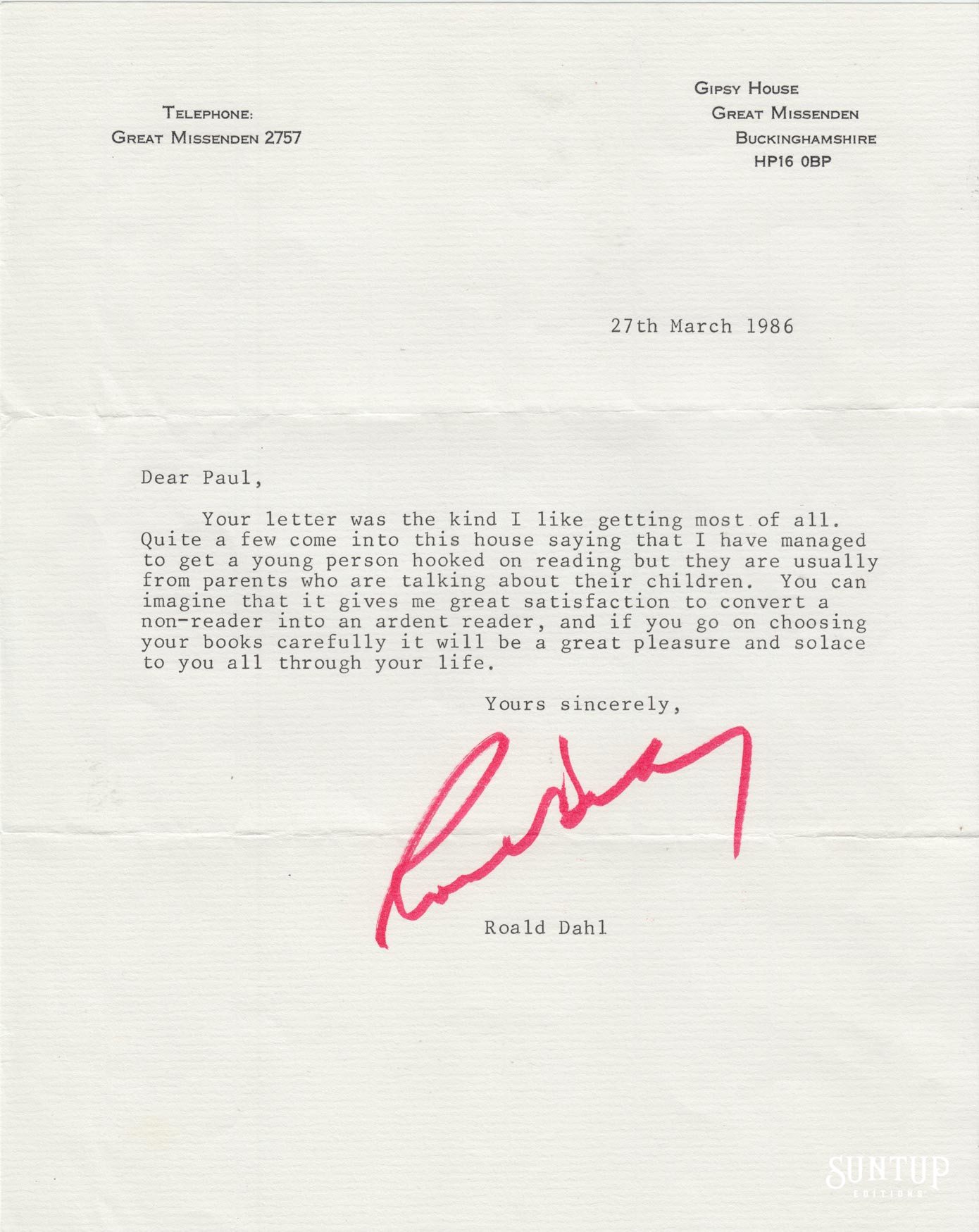 In 1986 Paul Suntup sent a letter to his favorite author as a child. This is the reply he received back from Roald Dahl, which is reprinted in this edition of Charlie and the Chocolate Factory, and it is accompanied by a one-page note written by Paul.

Over $25,000 in prizes including a Roman Numeral Edition!

Distributed randomly in all editions of Charlie and the Chocolate Factory are 25 Golden Tickets! Each ticket features a unique number from 1 to 25, and depending on which numbered ticket you have, you will win one of the following prizes:

“The most luxurious chocolate makers in the world are Fortnum and Mason in Piccadilly.”

In addition to the prizes shown above, every Golden Ticket recipient will receive a Fortnum & Mason Chocolate Pralines & Ganache Selection Box. 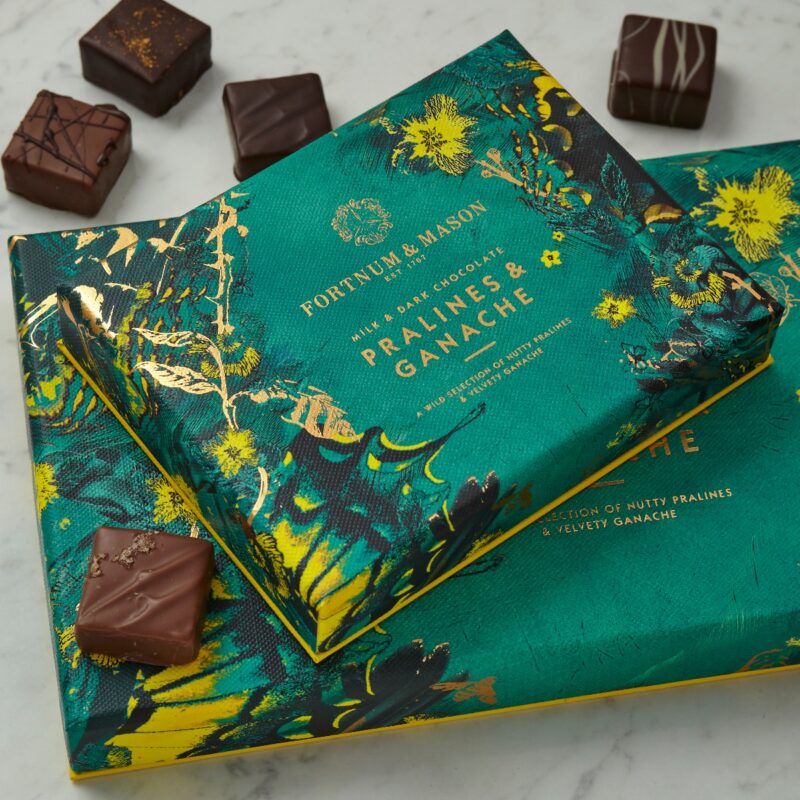 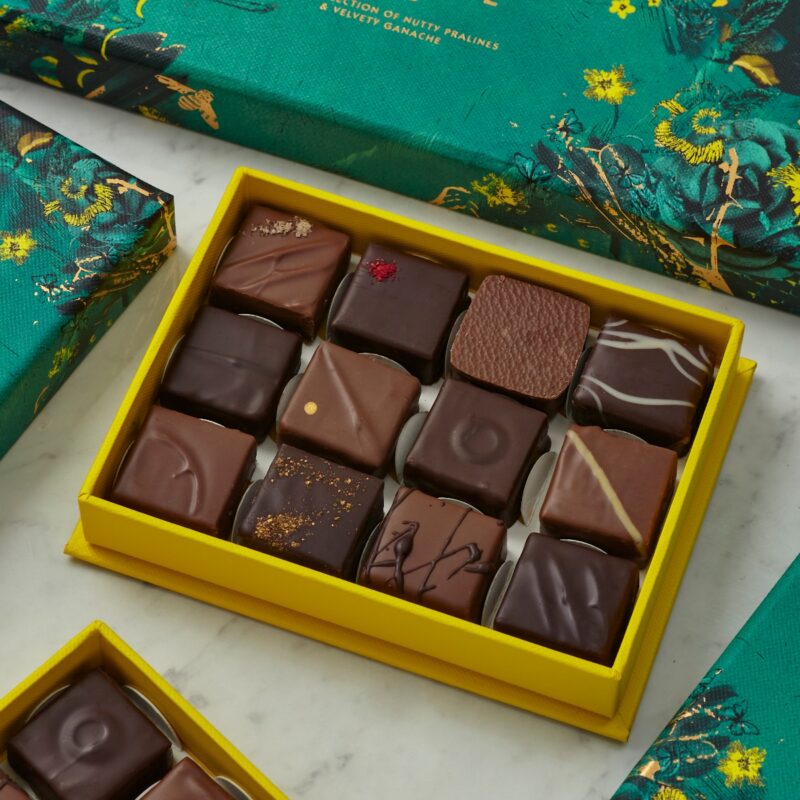 Shipping with every pre-ordered copy of the Numbered, Lettered and Roman Numeral editions of Charlie and the Chocolate Factory is this limited premium set of a 6” x 9” print, a 2” x 8” bookmark and printed envelope. Artist editions ship with the bookmark.

“So please, oh please, we beg, we pray,
Go throw your TV set away,
And in its place you can install
A lovely bookshelf on the wall.
Then fill the shelves with lots of books…”

Roald Dahl, from Charlie and the Chocolate Factory 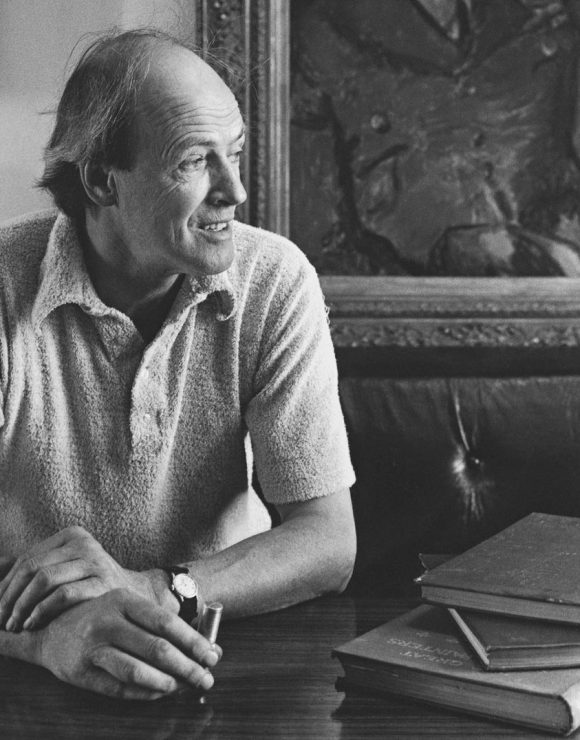 Roald Dahl was a spy, ace fighter pilot, chocolate historian and medical inventor. He was also the author of Charlie and the Chocolate Factory, Matilda, The BFG and many more brilliant stories. He remains the World’s Number One Storyteller. 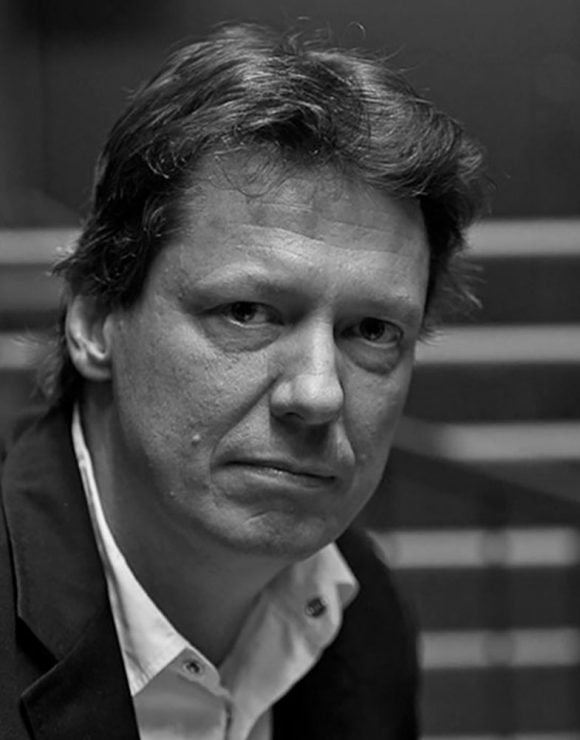 Donald Sturrock studied Modern History at Oxford University, after which he joined BBC Television’s Music and Arts Department where he worked as writer and director, making over thirty documentaries, including an acclaimed profile of Roald Dahl. Since leaving the BBC, he has written for television and live theater, including five opera librettos, one of which is based on Charlie and the Chocolate Factory. His critically acclaimed biography, Storyteller: The Life of Roald Dahl, was published in 2010. Love from Boy, a collection of Dahl’s letters to his mother, was published in 2016. 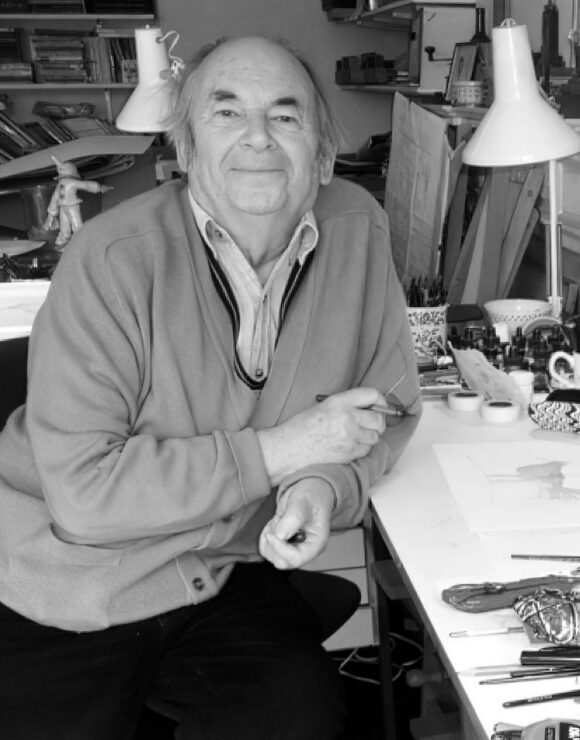 Sir Quentin Blake was born in the suburbs of London in 1932 and has drawn ever since he can remember. At 16, his first drawings were published in Punch, and he has made his living as an illustrator ever since. He is known for his collaboration with writers such as Russell Hoban, Joan Aiken, Michael Rosen, John Yeoman and, most famously, Roald Dahl. His books have won numerous prizes and awards, including the Whitbread Award, the Kate Greenaway Medal, the Emil/Kurt Maschler Award and the international Bologna Ragazzi Prize. He won the 2002 Hans Christian Andersen Award for Illustration, the highest international recognition given to creators of children’s books.

In 2004 Quentin Blake was awarded the ‘Chevalier des Arts et des Lettres’ by the French Government for services to literature and in 2007 he was made Officier in the same order. He received a knighthood for ‘services to illustration’ in the New Year’s Honours for 2013, and became an Honorary Freeman of the City of London in 2015.

A Matching Pre-Order email is sent to owners of our previous publication (Blackwater) at 9:00 A.M. PT on the day of announcement. If you did not receive the email, contact us here. If your order is not received before the deadline, your designated number or letter will be assigned to the new owner.