The Road to Misery – Part 1: The Persistence of Memory

“Art consists of the persistence of memory.” Stephen King, Misery

Memory is a strange and curious thing. It has a way of twisting the past to suit the present. More often than not, memory distorts just as much as it may recall.

There have been several experiences over the years that I would have liked to document at the time, but all I have of them are the memories. Misery was different though. Throughout the evolution of this project, I knew there was something special, and dare I say, historic, about it. As such I made the effort to chronicle as many of the steps along the way as I could. While events were unfolding, I could not help but feel compelled to record the moment in some way.

As I look now over the notes I had written myself, and the many photos and videos, I feel compelled to share with you the path that led me to this project. A great many of you have been so supportive, and I am always surprised and humbled when I am asked to share more about myself, my process, and the road that led me here.

While I haven’t heard anyone use the words ‘overnight success,’ I have certainly heard it implied. The truth is, the road to Misery was anything but. Sure, I mean, in about a year, I went from what seemed like zero, to publishing a signed limited edition of Misery. But I had been failing for twenty years before all this happened. Failing at everything I tried, in fact. Making mistakes. Bad decisions. I lost all of my money. I was broke more than once. I was sick. Out of work. All that, before all of this.

Okay, well there were some successes in there, as well, some good times. I don’t want to sound too dramatic. But when I consider the landscape of the past two decades, I usually conclude that as a whole, as a sum of the parts, it was a failure.

Failure is a multi-faceted word though. One might turn it around and say that each failure was really a small success, because it taught me lessons, helped me to grow, and forged my character. It helped mold me into the person I needed to become, in order to achieve what I wanted to achieve.

Maybe that’s a better way of looking at it. The experiences over those past two decades were a series of orchestrated events, that assisted me in reaching a place where certain dreams could manifest. They were necessary. Some of them seemed to be rather detailed balletic-like movements, although without the grace. I suppose though, that one could argue that there is a certain grace in a baseball bat smashing through a glass window. Maybe in slow motion, in a darkened movie theatre.

So, where did the road to Misery begin?

Well, long before I was born, there was a formless and empty darkness. Wait, that’s going a bit too far back. But I do feel as if it began there. It existed before, during, and will continue to exist into the distant future, through to the end of it all. Then someone else will be harpooned by it, and so it goes.

But let us pick up the story in 1987. It is early in the year. I am nineteen years old, turning twenty in December. I do not have many memories of being a big reader as a child, other than nursery rhyme books, and my earliest memory of finding myself completely lost in a book came in my early teenage years when I discovered Roald Dahl. I bought and read everything of his that I could get my hands on, and he turned me on to reading in a big way.

I enjoyed writing letters to my favorite authors. This was before the internet, and email. I would type them on a typewriter, and mail them off. Here is a response I received to one of my letters from Roald Dahl: 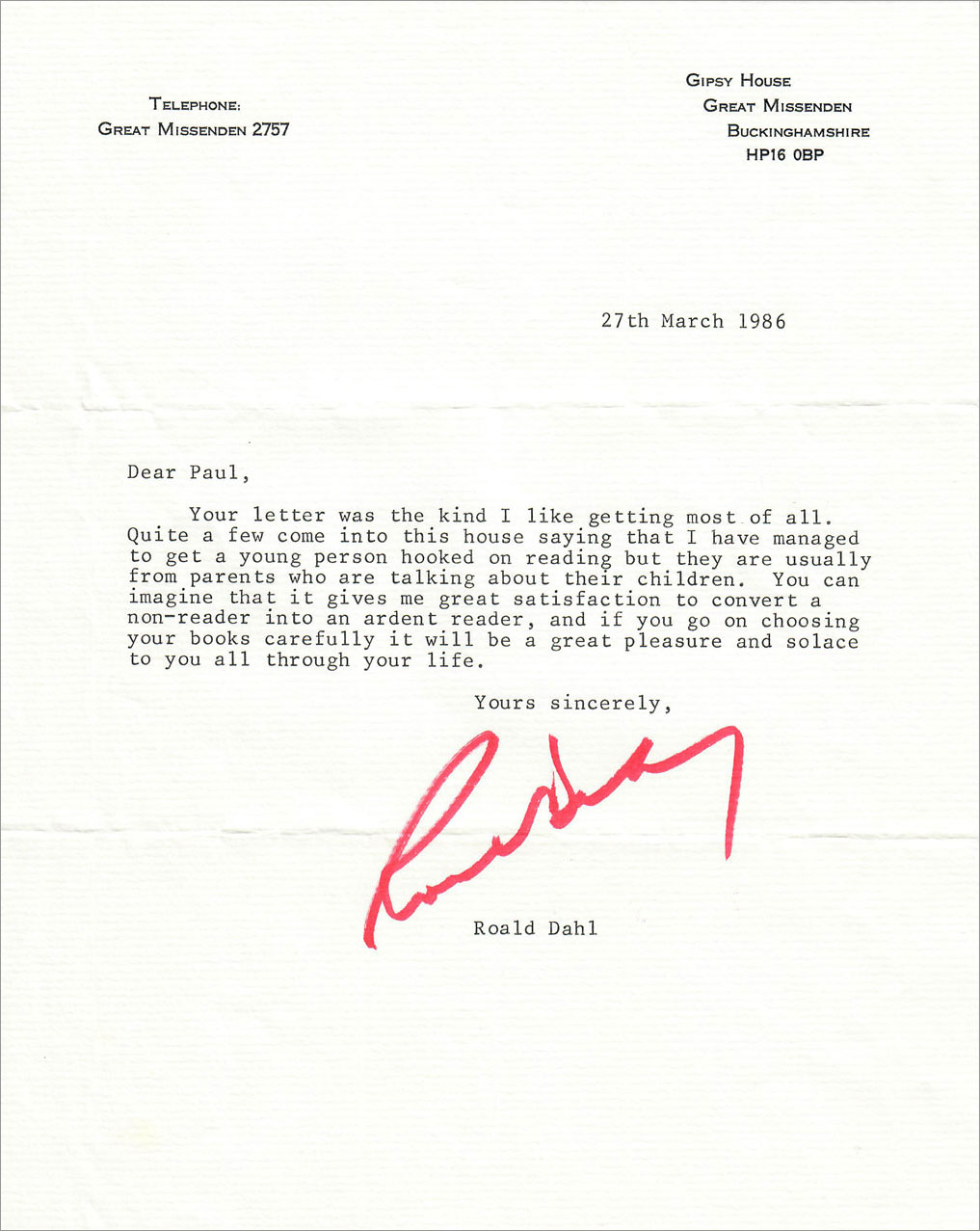 He also signed my paperback copy of Tales of the Unexpected, which I still have to this day. Thinking back to that time, this letter and his books kept me connected to reading, encouraged me to keep seeking books and authors I had not yet discovered, and it was the genesis of my lifelong love of books.

Maybe it was my enthusiasm over Roald Dahl, or this brief correspondence that drove me out of my house one day toward a bookstore, seeking more books to read. I would like to say it was a cool day, with a crispness in the air, hinting at something magical just around the corner. But truthfully, I have no recollection of the weather that day.

What I do recall is standing in the store, turning toward the section of new releases, and moving toward it. One book in particular caught my eye and I moved in closer.

It was The Eyes of the Dragon, by Stephen King. I lifted it off the shelf and in that moment, everything changed, and the road to Misery began.